Home
Earth's Mightiest
WHO THE HELL IS KEITH GIFFEN? (His Top 10 Works) Note: This post is based on a post that originally appeared at my other site.  It has been updated.

All the real geeks can easily answer the question posed by the title of this post: He’s the mad comic writer/artist and genius behind the semi-satirical Justice League International, and the creator of Lobo. But with a Guardians of the Galaxy movie on the way, I thought it was time that this man got a feature.

Keith Giffen’s contributions to the DC Universe are legion (or “Legion”): He was the artist, with writer Paul Levitz, on the most important Legion of Super-Heroes story of all time: The Great Darkness Saga, which made Jack Kirby’s Darkseid character a major player in the DCU.

In 1987, along with cowriter J. M. DeMatteis and artist Kevin Maguire, he created the brilliant and hilarious Justice League International.

And in addition to the aforementioned story arc, he brought his sense of humor to the Legion of Super Heroes, helping create the Legion of Substitute Heroes. He also had some minor hits at Marvel, with a funny take on The Defenders—not to mention that he spearheaded the revival of Marvel’s cosmic line, beginning by taking over on the Thanos series from Jim Starlin and writing the first modern cosmic “event:” Annihilation.

Oh, and he created, among others: Lobo, Rocket Raccoon, the Blue Beetle (the Jamie Reyes version), Jack of Hearts, the Katherine Kane version of Batwoman, Maxwell Lord, and Ambush Bug.

Keith’s ability to combine whimsy and humor with “serious” superhero stuff is unparalleled. Seriously. I can’t think of another writer who has been able to do this so well, so often, and for so long.

Here’s my “Keith Giffen top 10.” It’s not necessarily the most important work he’s done, it’s what I personally recommend the most. And although I love his Kirbyesque art, I’ve focused on his written works in this list.

THE TOP 10 WORKS OF KEITH GIFFEN 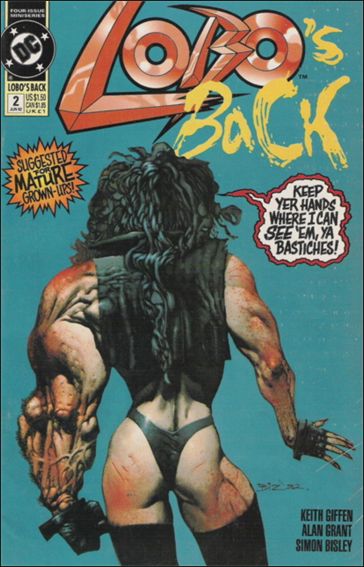 10. LOBO’S BACK. It’s a little tough to pick a specific Lobo story warranting an entry on this list, but I figure a comprehensive Giffen primer has to include one. I’m going with 1992’s Lobo’s Back. In this story, Lobo get’s bisected by a midget who lives in a blivet. If you don’t know what a blivet is, look it up. It’ll make you want to read this story. Also, Lobo turns into a woman and a bunny. One of Giffen’s most profane works. Lobo may not be Giffen’s most sophisticated work, but it’s some of his most lasting and popular.

9. LEGION OF SUPER-HEROES ANNUAL #1. Is it fair to have three LSH-related books on this list, but only one Justice League one? I think so. And not just because the Legion work was so popular. Although I’m a huge fan of Giffen’s JL work, his work on LSH had much greater range. There were “serious” stories and epics (like the #1 story, below) alongside his funnier ones. But this story was perhaps the most complex done-in-one of Levitz and Giffen’s run with this team book. In it a little girl is dying and her father seeks Brainiac 5’s help to save her life. Brianiac 5 tries to help her using a computer capable of independent thought. That never goes well. It’s a little like Ultron, but the emotional center of the group is the girl and her father, rather than the Legion itself, which makes for an interesting dynamic.

8. HERO SQUARED VOL. 1. An indie book from Boom! Studios by Giffen and DeMatteis, with art by Joe Abraham, about a super named Captain Valor who teams up with an alternate reality version of himself (hence the “squared” part of the title) who lacks superpowers. This was Giffen’s first creator-owned project.

7. ANNIHILATION. Marvel’s first “cosmic event” by someone who wasn’t named Jim Starlin, Annihilation was a standalone series with several tie-ins—some of which were also written by Giffen. The book built off of Giffen’s work finishing up the Thanos series, and focused on Annihilus’ incursion from the Negative Zone into the 616 Universe. It’s a great event story that essentially reintroduced and rebooted Nova, Drax the Destroyer, Moondragon, Firelord, and many others…And made possible the coming Guardians of the Galaxy movie. See also: Thanos #7-12, collected as Thanos: Samaritan, which is probably most character-focused Thanos story you’ll ever read. It really makes him make sense—and makes him sympathetic—as a character, without playing down or reducing in any way the fact that he is a megalomaniac.

6. THE HECKLER. I haven’t been fortunate enough to read the entire Heckler series—it’s never been reprinted to my knowledge, and I can’t find it anywhere. But what I have read is pure genius. The Heckler, a DC book, is a “superhero” whose power is to annoy people. Basically, he mocks and insults people until they become so confused and/or enraged that they can’t think straight. He also knows how to take a beating. The book combined literary/grammar humor, puns, insults, broad slapstick, and just about every other kind of joke you can imagine into a wonderful sendup of comic book heroes. If you find these issues anywhere, let me know. I want to read ‘em all!

5. LEGION OF SUBSTITUTE HEROES SPECIAL #1. A 1985 feature that finally gave this spin-off group the fame they deserved! Giffen did both the art and the story, with a script by Paul Levitz, which was the way they collaborated on many of their Legion-related projects.

4. DRAX THE DESTROYER: EARTH FALL. This four-issue mini completely reimagines the old Avengers villain—created by Jim Starlin—as a warrior with a mouthy girl sidekick. Giffen is great at writing sidekick stories: He used the device in his work on Thanos, and the Legion of Substitute Heroes (see below) are essentially all sidekicks. He can rely too heavily on this device (or perhaps it is more accurate to say that he relies “too often” on it), but here he does a great job at using the human earth girl to show Drax as a sympathetic character, and using Drax, conversely, to draw elements out of the girl’s character that produce mutual depth and portray a truly loving, father-daughter type relationship. Absolutely wonderful writing. 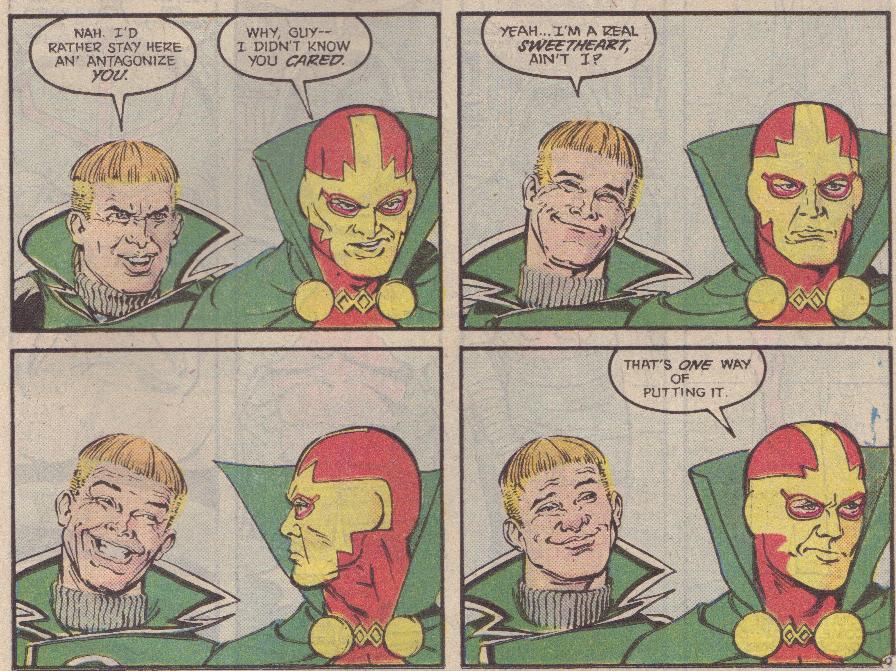 3. JUSTICE LEAGUE: A NEW BEGINNING. Numbered as Justice League #1-7, this was partly an early (1987) foray into the realm of using #1s to drive sales. Folks weren’t buying the Justice League of America book the way they used to, and Giffen and his regular writing partner J.M. DeMatteis got the idea to make a “funny” JLA, or a “B” team—which later became Justice League International. Hilarity ensued, including the best (and really the definitive) depiction of Guy Gardner ever, culminating in the best punch in DC history. Frankly, I could fill a top 10 with many entries from Giffen’s Justice League/Justice League International run—which spanned several volumes—but this is the best place to start, so it’s occupying a placeholder for the entire, wonderful series. If you like Volume 1, you’ll probably like them all. Oh, and it had the best punch, ever, too. But I already wrote about it here so I won’t mention it again.

2. D.C. COMICS PRESENTS #59. Not only is this the best issue of DC Comics Presents of all time, it’s also the best Ambush Bug story ever (and there were some great ones) and one of my top 10 DC comics of all time. It’s a done-in-oneIt is a crime against Art that “Ambush Bug II”, starring Superman and the Legion of Substitute Heroes, from DC Comics Presents # 59 is not included on this list. It remains my favorite Ambush Bug story of all time and is my favorite non-strictly-Legion story that Giffen ever did. If you like it, I’d also recommend the first and second Ambush Bug miniseries, but this is still the one to beat. 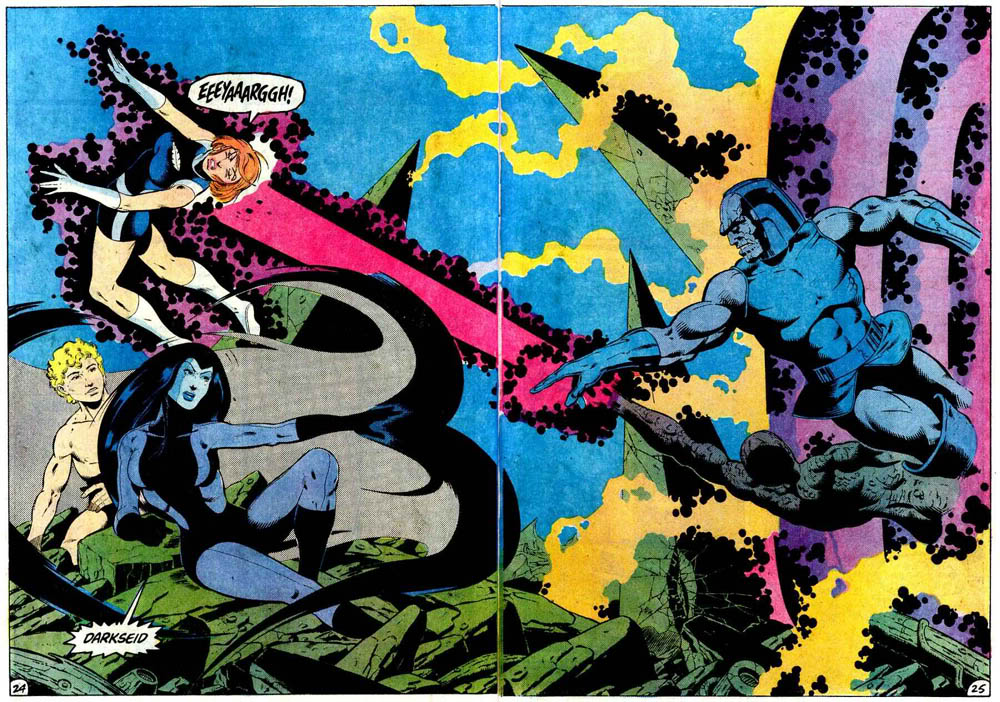 1. THE GREAT DARKNESS SAGA. In just five issues, from Legion of Super Heroes #290-94, Paul Levitz and Giffen created a massive epic that turned Darkseid from a lesser-known Jack Kirby new God into the major villain of the DCU—the one, in fact, who would go on to “kill” Batman. Legion comics are notoriously hard for new readers to follow, as the cast of characters is upwards of 100, but this particular arc is “new reader” friendly. More or less. It’s important to remember, too, that this arc was at least partly responsible for turning the Legion into DC’s second best-selling book. It was beaten only by Wolfman and Perez’s New Teen Titans.

Oh, and about that punch…I can’t resist posting it again.