On my old site, I wrote about the top 5 Jason Aaron Marvel comic books.  I’m updating that post today, for a comprehensive look at Aaron’s major works.  Dude is prolific, so I can’t say as I’ve read everything he’s ever done, but I’ve tasted quite a bit of his menu and find it widely variable—in both quality and genre.
After the break, my personal top 10.

You know, as I started researching this post, I realized how similar Jason Aaron is to Garth Ennis.  The only difference is that when Ennis works independently without an editor you get pornographically obscene violence (see: Preacher, Crossed), whereas Aaron tends to be a little more grounded in reality and far more “acceptable.”  Aaron skirts the edges of ultraviolence and grit, but never digs in the way Ennis does.  But both writers have had terrific runs with Ghost Rider, Punisher, and “true(ish)” war stories.
Maybe someday I’ll do a head-to-head, and see who is the better writer.  (Who am I kidding?  Ennis would win that hands down.)  But for now, here’s ten comics you won’t go wrong reading—the ten best comic books Jason Aaron ever wrote…

11.  Black Panther, “See Wakanda and Die.”
A Secret Invasion tie-in that did a nice job of finishing what Reggie Hudlin started in his 2007 relaunch of the character by putting Black Panther in context.  All in all, it’s a really fun read and a fine example of what Aaron does best: Action stories.  This is an earlier work for a writer who recently seems to have mastered his craft.  It doesn’t crack my top 10, but it bubbles under.  And since there are so few Black Panther books worth reading, it warrants a mention.
10. Immortal Weapons #1 (collected in the trade paperback, Immortal Weapons).
Jason’s story about the unflattering origin of Fat Cobra—one of the many fascinating characters created by Matt Fraction and Ed Brubaker in the pages of Immortal Iron Fist, was touching and hilarious. An example of how great a done-in-one can be, and how minor characters can support a full story.
9.  X-Men: Schism.
Jason Aaron was responsible for the event that broke the X-Men up into rival camps, and paved the way for Cyclops becoming a total ass in AvX.  As far as events go, this was one of the best I’ve read in years.  It was action-packed, but still contained enough character moments to keep a less-action-driven reader interested.  This is how you handle an event.
8.  Joker’s Asylum: Penguin #1.
Another fine done-in-one.  There’s not many writers today who can make you care about a character enough to be invested in a single-issue story.  The longer form dominates the market today, without exception.  And to be able to do so with a character as reprehensible, unlikable, and physically disgusting as Penguin is a testament to Aaron’s skill.  This is a great story about a short, fat villain who just wants to be loved.  Or, at least, to get laid.

7.  Ghost Rider.
Jason Aaron had a terrific run with Ghost Rider that explored the mythos and history of the character without getting overly bogged down in the usual pseudo-Catholic nonsense.  Ghost Rider is, in my opinion, one of the hardest characters to write.  He looks great—and most of his books sell solely based on his appearance—but as far as memorable scripts and storylines, you’ve got the Garth Ennis stuff and Jason Aaron’s run.  The final four issues Aaron wrote seem a little rushed, but they’re essential to cap off the story he was telling.  Even if you don’t like Ghost Rider, you’ll probably like this book.  It’s great.
6.  Scalped.
I haven’t finished Aaron’s long-form crime story that takes place on an Indian reservation, so perhaps it’s unfair for me to include it here.  But I’ve read a little more than the first half  (my library stopped ordering trade paperbacks at that point) and I definitely plan at some point to pick up where I left off and see how it ends.  I’m sure most “real” comic book lovers would rate this higher, and it is a powerful read without a doubt.  Aaron creates a whole world of gritty main characters and side-stories, it’s complex and sophisticated…But I can’t get past the art. It’s so murky and dark that I often can’t tell what is going on in the series.  Perhaps it’s low quality printings (the trades are on newsprint).  But even with that obstacle, I still very much enjoy it.  I know if anyone who loves Scalped reads this, I’ll get hate mail, but what can I say?  Ultimately, it’s a matter of taste.  My taste.  And I still thought highly enough of the comic to put it on the list.  It’s a great story—without a doubt—and one that would make a great serialized TV show.
5.  Wolverine and the X-Men (ongoing).
I was extremely skeptical of the Wolverine-as-babysitter concept here.  It seemed like a one-joke comic that would quickly get worn out—either that, or it would be the mutant version of Avengers Academy.  But Jason Aaron has managed to write a book about an ever-expanding cast, with dozens of regular members, in which every person gets meaningful facetime, and each character has a distinctive voice.

Even more amazing, the stories equally balance action, “soap opera” elements, tragedy, and all the other aspects of life in a Marvel Universe—literally giving something to everyone.
The series dipped a bit during all the AvX tie-ins, but it’s hard to write your “own” story when you’re depending on an event-driven change.  Still, even throughout that time period, this was one of the books that was the most fun to read, and consistently was the most surprising.
4. The Other Side #1-5.
Jason Aaron and Cameron Stewart tell the story of the Vietnam War, with two narrators: One soldier from each side of the conflict.  It’s not necessarily a fresh device, but it’s handled very well.  And there’s a horror element here as well—it’s not straight “nonfiction.”
3. Wolverine: A Day in the Life (reprinted in Wolverine: Weapon X, vol. 1: Adamantium Men).
I should say: I enjoy some Wolverine now and again, but most of his self-titled comics haven’t resonated with me.  They seem remarkable unremarkable.  Average.  Aaron’s are some of the better examples of how to make Logan work as a solo character, but even most of Aaron’s run isn’t much better than mediocre distraction.
This particular tale is a short story, with art by the brilliant Adam Kubert; it shows how it is remotely possible that Wolverine can be featured in 9 different Marvel books per month. Tongue-in-cheek, but fantastic.
2. PunisherMAX. 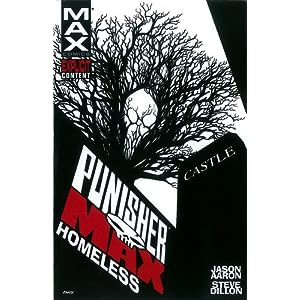 When Garth Ennis left PunisherMAX, so did most people.  Ennis’ run was the definitive take on Frank Castle as a character.  Jason Aaron’s story, 20-or-so issues long, was completely different.  It places Castle in “a” Marvel Universe, but not “the” Marvel Universe.  Aaron’s story is about the rise of Kingpin, Bullseye, and Elektra, and how Frank Castle becomes the man who would stand against these arch-criminals’ rise to power.
It’s bloody, profane, hardcore, and absolutely brilliant.  If you want to read the shadowy, perverse inner workings of Frank Castle, go to Ennis.  If you want all-out violent gang wars, this is the best Punisher story you’ll ever read.  And Steve Dillon’s art, with clean lines and theatrical, almost “staged,” scenes, is a stark contrast to the darkness Ennis explored in PunisherMAX.  Yes, Dillon worked with both Ennis and Aaron on Punisher, but it is here that his talents are put to the best use.
1. Wolverine, “Get Mystique.”
Wolverine and the fine foxy blue lady go at it for 120 pages of mayhem and destruction, ending with her “death.” A great example of an extended knock-down-drag-out. A brief coda, “Get Mystique: Slight Return”, which is fun but nonessential, can be found in Dark X-Men: The Beginning.  Essential reading.
Comic Book Top Ten, Jason Aaron
Tweet Pin It