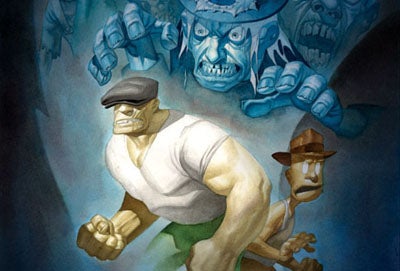 I recently posted on the DC news out of NYCC.

But Indie books need love too!

Lots of cool items about movie deals, new Jeff Lemire projects, the newest Grant Morrison comic, and more!  (Like a potential movie from David Fincher based on Nate Powell’s The Goon comic….

All complete with a “will it suck” meter!

CROSSED: THE MOVIE.  Garth Ennis indicated that he is writing/directing webisodes, with the ultimate goal to write/direct a movie of his pornographically violent “Crossed” comic.  It seems impossible to make a movie based on a comic that is so over the top, but Ennis indicated

that he’s maintaining complete creative control.  Prognosis that this will actually be realized seems very, very low.  WILL IT SUCK?  I’d say yes.  The comic book is a stomach-turning experience, and short of The Human Centipede, I can’t image a film being able to duplicate that.

THE SHADOW: YEAR ONE.  I confess, I haven’t read a Shadow comic since Howard Chaykin revived the brand in the early 1990s, but I have been curious to read what Garth Ennis is up to on it.  Now, I hear that Nexus writer Matt Wagner will be writing a “year one” storyline for Dynamite comics in 2013.  WILL IT SUCK?  Color me intrigued.

THE SIXTH GUN TV SHOW.  The Oni Press comic by Cullen Bunn and Brian Hurtt is under development for NBC, by a producer of the old Lost TV show.  WILL IT SUCK?  Probably.  In related news, I’m sure it’s no coincidence that Oni Press announced a Sixth Gun spin off comic called, in a shot of pure imaginative brilliance, “Son of a Gun.”

THE GOON MOVIE.  David Fincher is one of my favorite directors (he did Fight Club and Se7en), and it looks like he’s trying to get Kickstarting funding for a $400k sizzle reel for a film based on the Dark Horse comic.  WILL IT SUCK?  Hell to the no.  David Fincher doing zombies and vampires and mobsters?  That’s a sure win.  The only wrinkle: It’ll be animated.  That doesn’t stand in my way, but I understand it makes Hollywood nervous to think of a cartoon that isn’t Pixar.

BPRD: VAMPIRES.  I blow hot and cold (mostly cold) when it comes to Hellboy comics, but this is one that will be written by Mike Mignola himself, with the team behind Daytripper (Fabio Moon and Gabriel Bá), one of the best comics of this young Century.

SEAGUY.  A third Seaguy book is underway, from Grant Morrison and Cameron Stewart.

ADVENTURE TIME.  Boom! Studios has a definite hit on their hands with the comic adaption of the logic-breaking cartoon, so they’re planning several miniseries/spin off books.  They also plan to continue to produce the Garfield comic.  This seems very smart to me—they’re cultivating an audience of younger readers through hip, all ages books.  If we don’t get kids to read comics, the art form will die off with our generation.  Plus, most kids read Marvel—this gets them into a whole different publisher’s stable.  Way to go, Boom!

RICK REMENDER NEVER SLEEPS.  Remender is one of the main architects of Marvel Now, being responsible for the flagship title Uncanny Avengers as well as the Captain America relaunch, but that hasn’t stopped him from keeping up with the indie comics.  He announced he’ll be working with Dynamite! on a pulpy sci-fi book called “Devolution” with artist Paul Renaud.  WILL IT SUCK: Even odds.

CEREBUS TO BE REPRINTED.  IDW finally got cranky old Dave Sim to agree to let them publish the classic “High Society” storyline, as well as a collection of Cerebus covers—because the covers were not reprinted in the large paper “phone book” reprints of the title.

RED TEAM.  Garth Ennis will have the “flagship” title for Dynamite’s new “crime line” of comics.  Red Team will be 7 issues, and will look at an adventure in the life of a NYPD crime task force—with art by Craig Cermak.

THREE NEW JOHNY BYRNE SERIES.  IDW announced 3 new comics from the man who was once my favorite creator, hands down.  I have to admit, I haven’t kept up with his indie work other than the first Hellboy story and a few Next Men issues here and there, but I own his F4 Omnibus and his entire Uncanny X-Men run, as well as most of his work on Marvel Team-Up.  He’s the only comic book guy I ever stalked.  True story.  If you want to hear it, just ask me some time.

IDW SPIDER-MAN ARTIST EDITION.  IDW’s coolest stuff is their expensive, over-sized, beautiful “artists editions.”  I really love the one for Daredevil: Born Again.  They announced a few others at NYCC, one of which was Gil Kane’s “Spider-Man.”  And if that doesn’t excite you: “The Best of Mad.”

“NEW” ANDY DIGGLE AND JOCK PROJECT.  The duo behind the good, hard anarchic fun of The Losers will release their book “The Surface” here in the U.S., through Image Comics.  SUCKMETER: Low.  While Diggle’s work is generally mediocre, Jock’s work is never short of stellar—and their work on The Losers was very, very good. 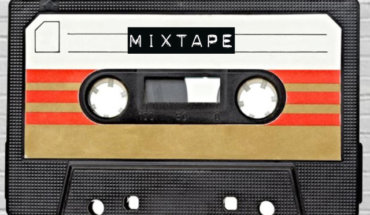