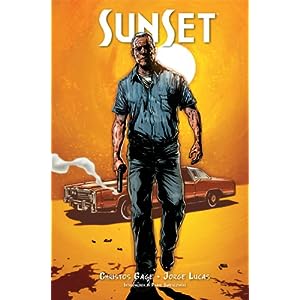 Christos Gage is probably best known as the current writer of X-Men Legacy and Avengers Academy, but maybe he ought to be better known for his creator owned work.  Like Sunset.

Sunset is a hard-boiled noir about an old man and an old grudge.  It’s gritty, rough and touch, but it’s also tender.  Most crime graphic novels focus on one “good” relationship (a man and a woman) and one “bad” one (the old issues of the past haunting an antihero who wants to move on), and Sunset is no different.  At least on the surface.  But Gage’s writing has unusual depth.  On the surface, it’s a take on Clint Eastwood’s Grand Torino.  So much so, in fact, that the actor is referenced in the book.  But in some ways, this is a conscious choice.  Comic books are, at heart, designed to be accessible with at least some degree of immediacy.  The use of an existing “character” like Eastwood helps us as readers identify immediately with Gage’s hero.  But Gage doesn’t rely on it for any more than that.  He’s woven a rich story, and a rich history, for everyone in the book.

About the art: It’s photorealistic, which is another way Eastwood is referenced.  As is Jack Palance and other recognizable celebrities.  Some may find this annoying or distracting, but I found the art fascinating.  Especially the facial expressions.

This is an A-plus work–highly recommended.

Get it off Amazon.