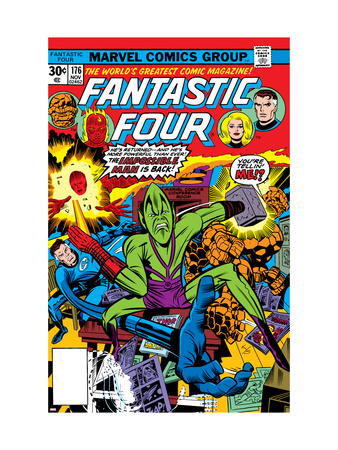 Today is the 95th August 28th since Jack Kirby was born.

Hit the break to see why this matters (as if you have any doubt about it).

WHY YOU SHOULD STILL CARE ABOUT JACK KIRBY

Obviously, Kirby is one of the most important comic book creators of all time.  But there’s lots of folks who helped start something who no longer matter, like the guys who bankrolled Fantastic Four #1 or the folks at DC who bought Superman for a song and the faceless, nameless creators who kept the character going through the darkest times (the 1960s) when nobody was buying comic books.  Kirby is still relevant.

What set Kirby art apart from the pack is its emphasis on power, strength.  His use of wider panels, extreme close-ups, and depth made the reader feel less disassociated from the action. You weren’t watching the Hulk punch someone, Hulk was about to hit YOU!  As comic books increasingly become a medium to pitch movie projects, the use of the widescreen and the need to convey “big action” become critical to the success of the medium.  Artists today could still learn a lot from studying how Kirby revolutionized panel-art in this way.

A list of some essential reading and/or characters created by the man….It’s hard to cram into one list all the important things he did (Iron Man didn’t even make the top 10!), but I tried to focus on his breadth and to recommend some of the books I most enjoyed reading.

10.  THE NEW GODS/FOURTH WORLD.  Disgusted by the way he was treated at Marvel, Jack Kirby left to create an all-new world for the Distinguished Competition.  The New Gods never sold all that well, but we got Darkseid out of it.  Also, of course, Mister Miracle and Granny Goodness.

9.  The Hulk #1-5.  He was grey, not green, but Kirby’s portrayal of the character’s massive, lurking profile—based on Frankenstein—remains the definitive take on the character today.

7.  THE DEMON ETRIGAN.  DC’s rhyming “monster hero” was Kirby’s most influential foray into the supernatural, and the character is still headlining his own title today.

6.  The Eternals #1-19.  Kirby returned to Marvel after a bitter break up to bring his “New Godsy” concepts back to the House of Ideas.  In Kirby’s story, the genesis of life itself was due to alien intervention, and The Eternals were created to protect their creation.  The books was a little too Sci-Fi for many of Marvel’s fans, and the team has never caught fire the way many of Kirby’s other creations did, but I say it was ahead of its time.  In my view, these are some of the best Kirby writer-artist comics out there, and they are well worth digging for.

5.  Marvel Masterworks: The Avengers Volume 1.  Kirby did the layouts under Don Heck’s pencils for the first 8 issues of The Avengers, but his sense of motion and style are, in my view, the main reason those 8 issues were so much more energetic than many that followed them.  Plus, those covers…My God.  They’re still amazing today.

4.  CAPTAIN AMERICA.  Along with writer Joe Simon, Jack Kirby created Captain America before he himself served in the US Army.  The title was a huge success, and actually served to give Kirby some notoriety during his term in the military—and led to his assignment as a “scout,” drawing maps of enemy territory.  Without him, the Cap book went downhill fast.  It’s worth getting reprints (they’re everywhere) of those first 10 issues.  He returned to the character 20 years later, working with Stan Lee at Timely/Marvel, and was instrumental in the revival of Cap as part of The Avengers.

3.  The Black Panther Vol. 1 (#1-12).  The first time anyone gave the First Black Superhero his own book.  These are worth having for the covers alone…And as with most Kirby projects, reprints are plentiful and inexpensive.

2.  The X-Men #1-11.  Cyclops.  Jean Grey.  Juggernaut.  Iceman.  Magneto.  The Blob.  The Beast.  Angel.  Charles Xavier.  Sentinels.  The Danger Room.  Has there ever been a more influential eleven issues of comics?

1.  THE FANTASTIC FOUR.  The first fifty-or-so issues of F4 packed in more bold ideas and new concepts than any other comic book has ever done.  Ever.  It combined family, science fiction, and introspection.  It introduced characters like the four team-members, Galactus, Black Panther, Dr. Doom, The Silver Surfer, Annihilus, Ego the Living Planet…I could go on and on.  Also, Fantastic Four #5, in which the team travels back in time to meet Blackbeard the Pirate, is probably my Favorite Single Issue of all time.