The name alone is supercool.  A guy with indestructible bones who appears out of nowhere to take on the one guy that nobody can ever seem to beat, Hulk.  And he does so on behalf of Canada.

Wolverine may have been created by Len Wein, but he was developed by Chris Claremont and perfected by Claremont and Frank Miller.  Together, they established his Japanophile past but kept enough mystery that future writers could grow the mythology.  Arguably, Logan’s overexposure has decreased the depth of his character because there’s less to wonder about, and less for the reader to fill in.  Yet he continues to fascinate and thrill.  In many ways, he’s a parallel to D.C.’s dark and violent Batman, in that he can be written to appeal to any age group.  And because he seems like a bottomless well of coolness.

At left: The iconic cover to the greatest Wolverine story ever told…And one of the best comics of all time.

Before there were superheroes, most comics were about westerns or wars.  They were semi-realistic, or they were fantasies set in a realistic setting.  Superman changed all that, but Captain America formed a true bridge from the comics of the past and the new “capes” genre.

Cap first appeared in 1941, the creation of Joe Simon and Jack Kirby.  Soon after that, Kirby went overseas to fight the Nazis in real life.  His squad leader recognized his name, and asked if he was the creator of that “Captain America” comic.  When Kirby confirmed, he was assigned the important job of reconnaissance, where he used his artistic talents to draw maps of enemy bases.  In many ways, Kirby was Captain America.  A real hero.

No, he wasn’t the first superhero ever.  And it wasn’t even original to be an orphan.  Superman was an orphan.  As are just about every Disney character.  (Notice how just about every Disney cartoon starts with the parents dying?  It’s not a coincidence.  It’s every kid’s worst fear and greatest fantasy.)  But his origin was more vivid and brutal than the characters who preceded him (and those who followed, too, for that matter–Uncle Ben died off screen).

Batman captures our imagination because of the sense that he is so real.  And the character has unlimited potential: He can be campy or deadly serious; he can be futuristic or contemporary; he can be mean and grumpy or paternalistic…And every good writer who takes on the character adds something fresh.  This is a clear reflection on his adaptability.  For these reasons, I’m placing him second-to-only-one on my list.

Suggested reading: A list of titles to get a sense of how broad the character can be: 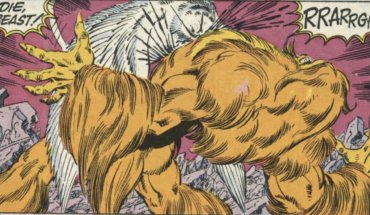