Hers was arguably the first Marvel death that really mattered, and she stayed dead for 2 years, which is an eternity in comic book years.  But more important than her death, was her life before 1984: She was one of the strongest women Stan Lee ever created.  She dated and stayed true to Cyclops, without being a slut or married.  Her transformation to Dark Phoenix was decompressed, unpredictable, tragic and probably the most gripping story in comic books.

She also grew not only in terms of developing her powers as she aged, which makes a lot of sense for a mutant (and really should happen with all of them), but also as a character.  We watcher her really mature, along with Cyclops.  In fact, the two of them may be some of the clearest examples of how

even “regular” characters in comic books can grow and change and become something new while still appealing to fanbases generation after generation.

Her return(s) can be annoying, but Grant Morrison handled that extremely well in his New X-Men run.  During that series, when she dies, she tells Scott Summers to go and be happy: “All I ever did was die on you,” are her last words.  And there was no need for me to write “spoiler alert” just then, because just about every writer of Jean Grey ends up killing her.  She actually dies twice during the Morrison run.

Holy one sidedness!  My top ten is 70% Marvel!  Yet both Batman and the original Robin managed to crack the top 10: Two characters who are most often considered a duo.  But Robin’s not here because he’s riding Batman’s coattails.  Dick Grayson earned his spot.

The son of parents who were murdered right before his eyes, Dick Grayson is the perfect foil for Bruce Wayne.  He doesn’t sulk, he revels in the opportunity to get justice for those who, like him, have been harmed by criminals.  By not taking it all so seriously, he is the yin to Bruce’s yang and, arguably, a much more interesting character on his own.  Who wasn’t thrilled when he became Nightwing, getting out from the Dark Knight’s shadow?  And at the same time, who wasn’t thrilled when he picked up the cowl while Bruce Wayne was lost in time–saving it for his ultimate return?  Dick Grayson was the first, best sidekick.  And when we were kids, admit it: You wanted to be Robin, not Batman.  Even with the green short shorts. 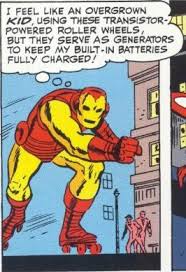 “Tony Stark makes you feel/He’s a cool exec with a heart of steel!”  So the old theme song went.  Of course, that was completely untrue.  His heart was actually defective.  But why quibble?

Why is Iron Man so high on the list?  Because of what he represented.  Created in 1963, Iron Man came at a time when the world was beginning to turn to plastics.  He represented manufacturing, war, all the things that pulled us out of the depression just 10-15 years earlier.  He represented corporate wealth at a time when the youth movement was just beginning to heat up and rock and roll was taking a firm hold on our culture. He wasn’t like the other Marvel heroes.  He was “the man.”  He was what Peter Parker was always whining about: Rich, powerful, and full of resources.

And the character has consistently led change in the Marvel U: He was the only one who could believably unseat Captain America and Nick Fury and still have at least a little bit of our sympathies when he, in turn, was unseated by Norman Osborn.  He treated women worse than James Bond did, but we still felt for him when he crashed and burned with alcoholism.  Even more so than most Marvel heroes, Iron Man is just as compelling when he’s Tony Stark as when he’s trying out the latest, coolest suit of armor.

And his armor is cool as hell.  Except the roller skates.

The best Iron Man stuff was by Dave Michelinie and Bob Layton, and you can’t go wrong with any of the stuff they did together.  In addition, here’s a few more specific references:

Daredevil was the first disabled superhero.  But that is not the most interesting thing about him.  He’s also a superhero whose job, as a secret identity, is to defend criminals from prosecutors.  But that’s also not the most interesting thing about him.  What makes the best Daredevil stories so special–whether it’s Miller/Janson, Bendis/Maleev, or Brubaker/Lark–is his humanity.  Daredevil is the most flawed superhero there is, constantly tempted by his power to do more than he should, and always fighting an internal battle between knowing what is right and needing to do what is wrong in order to reach the right goal.  Shadowland should have been his last temptation, and had the potential to be the greatest DD story of them all, but Marvel blinked.  They’re all about stories about bad-guys-going-good (Thunderbolts, Anita Hill, Elektra, Anti Venom, etc.) but when it comes to good-guys-going-bad, they chickened out.  Too bad.  Fortunately, it looks like Mark Waid is poised to bring DD into a new era: A return to the original character’s more swashbuckling nature.  A man who lost his sight but who is joyful and grateful for his superhuman ability to compensate with his other four senses.  Daredevil has been a “turning point” character for comic book storytelling more than once in his career: Miller’s run led the change to more mature superhero stories.  Bendis’ run showed that Marvel could do long form, decompressed storytelling.  And now Waid is using a medium that is at least 50% visual to

explore what it is like for a man who lives in the dark.

Plus, DD is my son’s favorite superhero.