Retro time, coast to coast!  Remember in the late 1960s/early 1970s, when there was  a clear contrast between the surfer music of Southern Cali and the 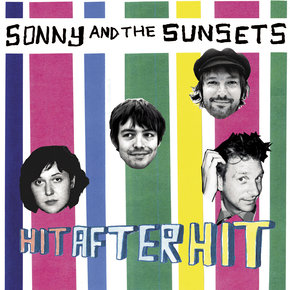 dark-and-moody New York sound exemplified by Velvet Underground?  Well, one of the great things about indie rock was that it looked behind Brian Wilson’s sunny compositions and found the darkness within them.  Today, we discuss three examples of this old-is-rediscovered-and-sounds-new-but-still-feels-retro phenomenon.

Of the three, the least innovative–but most catchy–is Sonny and the Sunsets‘ 2011 foray into beach-pop bleakness, aptly titled “Hit After Hit.”  Led by Sonny Smith,the album is a collection of, well, hit songs.  Each one is a single, each is tons of fun, and jammed full of skillful hooks.  But at the same time, none of sounds overtly like pop music.  It feels grungy, garage-y, and unproduced.  Raw.  A little like perennial Berkeley Place favorite, Nobunny, but with much more melodic vocals–there’s no Ramones shouting–instead, there’s terrifically demoralized singing.  This is truly a man with his heart broken–he’s not angry about it, he’s in despair.  And he’s singing, again, over some of the catchiest surf-pop hooks around.  Great stuff. Get it cheap from Fat Possum records–one of the great indie labels.

Pretend You Love Me
http://player.groovebat.com/player.swf

Next up is the more experimental Vivian Girls‘ latest, Share the Joy.  Three Brooklyn babes who combine surfer music riffs with longer, exploratory jams a la Velvet Underground.  It’s hard to classify any record with 6+ minute songs as “pop,” and I certainly wouldn’t use that word here.  But you can hear surf-pop underneath the garage drone.  This is a band who have only been around three years but have gone through that many drummers (the last one jumped to join Best Coast), and whose other members–Katy Goodman and Cassie Ramone–are also involved with side projects (La Sera and The Babies, respectively).  Yet, they feel like a band–tight and tough.  “Take It As It Comes” sounds like what would have happened if The Leader of the Pack had been a chick, and is back from the dead, singing about her car crash. Phil Spector could have done tremendous things with these extremely talented women.  (I mean, other than shooting at them.)

This is definitely thinking-person’s punk.  It’s an album that gets better and better with every listen. I can only imagine how amazing this band must be live.

It’s just three songs long, so it’s hard to get a feel for what else this band can do, but I really dug it.

Get the whole thing free here.