Home
Berkeley Place
NEWS ABOUT COMIC BOOKS, PART ONE: THE PRINTED WORD or DAREDEVIL, PUNISHER AND NICK FURY WILL BE BRILLIANT IN 2011 I have so much hot news for you this time, due in part to stuff that broke at comic-con and to the fact that so many superflicks are coming in a matter of months, that I broke these posts up.  This one on printed comics, for hardcore geeks like me and CD and Flightdreamz (it’s great to have regular commenters), and the next one on other media.  So, if you’re not interested in printed comics, don’t hit the break.  Instead, wait a couple hours for the next post.  And hit that break!

ENNIS RETURNS TO FURY! There can be no news above this news: Garth Ennis, the mad genius behind The Boys and DC’s The Hitman will be returning to the first property he wrote for Marvel: Nick Fury MAX.  He wrote two Fury miniseries for MAX a long time ago that were so over the top that they’ve never been reprinted.  For the art, we’ll get to see Ennis work with Goran Parlov again, after the groundbreaking work they did on PunisherMAX.  Ennis is known for not shying away from pornography (see creator-owned title, “The Pro,” e.g.) and ultraviolence (see everything he’s ever done), so this could be very, very, very . . . Awesome.  And wholly inappropriate for anyone wandering in to a Nick Fury title after seeing a Marvel movie.

MARK WAID ON DAREDEVIL. Second only to news about Garth Ennis is this item.  Here’s the conversation I had with my youngest (age 10) son last night, calling down to him from the second floor of our abode:

That’s right, Mark Waid, the brilliant mind behind my son’s favorite comic book (Irredeemable), as well as widely acclaimed turns on Amazing Spider-Man: Brand New Day, The Flash, Superman, and Captain America will be taking over Daredevil with a #1 issue this summer.  Shadowland stunk, and sunk Matt Murdock about as low as possible.  But Waid promises a fresh take on the usually tragic character.  According to the many interviews and panel discussions he’s given, the book will pick up after Daredevil Reborn and will focus on DD trying to reestablish himself as a hero after having become, essentially, a demonic version of The Punisher.  It will focus more on adventure than street grit.  Waid promises to shy away from Kingpin and The Hand, and to instead make DD a superhero again.  He’s tossing around names like Klaw, The Abomination, Electro, Sub Mariner, Spider-Man and Vulture as folks who will appear in the series.  Marvel isn’t skimping on the art, either, assigning Amazing Spider-Man: Brand New Day artists Paolo Rivera and Marcos Martin, each alternating on story arcs.  It’ll be nice to see DD in a new mode—his tortured soul persona has, frankly, been done to death—and will never be done better than Miller or Bendis.  It’s hard to say what I’m looking forward to more, this, Ennis, or Punisher (see below).

BUT WHAT DOES THIS MEAN FOR BLACK PANTHER? If you’re one of the five fans of Black Panther: Man Without Fear, you’ll get to see a guest-drawn issue by Phil Hester (but Francesco Francavilla continues to be the series illustrator), and Marvel promises that Daredevil #1 will not upset T’Challa’s applecart.  At least, not immediately.

BATWOMAN #1. Is delayed again.  J.H. Williams III did groundbreaking—truly—work on the first Batwoman story arc, and ever since then we’ve been waiting to see what comes next.  And it keeps getting delayed.  And DC isn’t saying why.

CROSSED. And speaking of Garth Ennis, Avatar Press has announced that Ennis and artist Jaycen Burrows will return to their zombie book, Crossed, with a new ongoing series titled Crossed: Badlands. 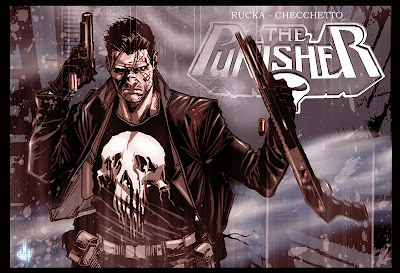 PUNISHER. The new series writer will be the genius behind Gotham Central, Greg Rucka.  There’s pretty much no way in hell that this can go wrong.  The art can be stick figures and it’ll be worth a read.  It will take place in the Marvel (not MAX) universe, and will pick up on threads left loose by the Fear Itself event.  Art will be by Marco (Amazing Spider-Man; X-23) Checchetto.

SPIDER-ISLAND. Marvel is just full of cool news.  This summer, beginning with a May 7 “Free Comic Book Day” preview and then with issue #667, The Amazing Spider-Man will begin an arc titled “Spider-

Island,” in which ordinary Manhattanites start getting spiderpowers, including four extra arms.  Writer Dan Slott (and artist Humberto Ramos) has been killing it on this series lately, and he’s started to hint at taking on some of the old JMS themes involving a mystical source of—or at least a mystical corollary to—Peter Parker’s power source.  Could this be part of it?  I hope so.  The story will include Hawkeye, The Shocker, and probably many other NY-based heroes.  Teasers also indicate that Spider-Man will have to “sacrifice” something . . . God, I love comic books.

THE BOYS NEWS. Garth Ennis and Darick Robertson’s long-promised “Butcher” side-show will be released this summer.  From what I’ve heard (but not read) Herogasm was pretty bad, so I’m not sure it will be worth your time.  I’ve stuck to the main series, The Boys, and with a few exceptions, I’ve never been disappointed.

SUPERMAN RETURNS . . . TO ACTION COMICS. With #900, Paul Cornell will end the years-long Lex Luthor storyline and Superman will return to the title.  It’s unclear whether that means Cornell will now get to write about the Man of Steel, or whether he’s moving on.

GHOST RIDER. The flaming skull will be getting a new ongoing in June.  Probably no coincidence that the new GR movie is due exactly one year later.  The series will be written by Rob (Daken: Dark Wolverine) Williams and drawn by Matthew (Doom Patrol) Clark.  It looks like the plan is to create a new GR, with Johnny Blaze kind of serving as a mentor.  GR is a character who has always looked cool, but rarely worked in a comic.  The best run was Jason Aaron’s 2009 series, and even that one was up and down in quality.

X-MEN: FIRST TO LAST. I don’t follow the world of Marvel’s mutants—it’s too complicated—but the previews for“X-Men: First to Last” have been intriguing, particularly because the art chores are by Paco Medina and Dalibor Talijic.  The story involves the “original” X-Men with some kind of time travel thing so they can team up with the current X-Men.  I may have to check it out….

JENNIFER BLOOD. After the first six issues of, the writing chores will be taken over by Al Ewing from Garth Ennis.  Are any of you reading this series?  Is it any good?  (Yeah, there’s lots of Garth Ennis news in this piece.  You got a problem with that?)

NEXTWAVE. Regular readers know that this Warren Ellis series is one of my all-time favorites, and it was recently collected in an “ultimate” collection that all of you should have, truly.  Although the series isn’t coming back, there are rumors that some of the members of the team will appear in upcoming issues of Heroes for Hire.