With a movie and a ton of new projects coming out over the next 12 months, Captain America is poised to become a much better known hero than he is.  His role in the Marvel Universe is essentially a counterpart to Superman: The idealistic, American leader of the publisher’s main superteam.  To now, he’s really not known too well beyond the fanboys.  And I can’t say I blame the world for sleeping on Cap.  When I started researching this piece, I realized that there really haven’t been a whole lot of truly great Cap stories . . .

10.  NEW AVENGERS: BREAKOUT (New Avengers 1-6). Brian Michael Bendis is one of the most consistently talented writers of the day, and his take on Cap isn’t one that changes the character, it’s one that  makes great use of the established mythology.  Captain America decides to re-form the Avengers after the savage “Disassembled” story (a great story, but it didn’t have enough Cap for this list), and we get to watch him convince (and fail to convince) his selected allies to become recruits in an effort to recover all of the inmates who escaped from super-villain prison. I only wish they’d continue to pursue that storyline–it kind of fell away without any real explanation.  But that has nothing to do with Captain America, so I won’t digress any further.

9.  CAP MEETS DEATHLOK (Captain America 286-288). Mike Zeck is my favorite Captain America artist of all time.  He captured the size of the character, with a barrel chest, tremendous biceps (perfect for Shield throwing!) and posture that stood tall.  Cap always looked like a true leader in Zeck’s hands.  In these three issues, Capt travels to the future to help the Luther Manning Deathlok prevent the world from a terrible future.  No, the story’s not brilliant, but it’s solid, fun, and the art is fantastic.

8.  NOW, BY MY HAND, SHALL DIE A VILLAIN! (Avengers 15). Stan Lee is an overwriter, to be sure, and he loves to tread familiar ground, but this tale, with Don Heck on art chores, is an example of the best of the old, original Marvel. Captain America’s past catches up to him in the form of Baron Zemo, who, along with the rest of the Masters of Evil, kidnaps Rick (“new Bucky”) Jones in an effort to capture Captain America.  While his teammates fight off Zemo’s crew, Cap goes mano-a-mano with Zemo, and in the end Baron Zemo dies.  He stayed dead, too (although his son would wreak all kinds of future havok).  The importance of this story to the development of the Cap character is that is overtly represents Cap’s break from his past–he puts Zemo to rest and is now ready to embrace the world he’s been reawakened to.  Right after this issue, the entire team changed.

7. CIVIL WAR (Civil War 1-7). Another Mark Millar battlepalooza, everyone who knows comic books (and many who don’t) know this story.  It’s gets a lot of flak because the ending didn’t really resolve anything, but it did do something major: It reinvented the Marvel Universe as a place in which Captain America no longer fit.  We see this happening throughout the series, particularly when he loses his temper and beats the snot out of Punisher (who refuses to fight back), and in the pivotal man-to-man confrontations with Iron Man.  We also get to see Cap really fight a way, using his military training and fighting for everything that matters to him.  In my opinion, this is the best “event” Marvel has ever done.

6.  CAPTAIN AMERICA COMICS #1. While I appreciate Jack Kirby for all he did for the medium, I must confess that his work doesn’t

do it for me and the old stories don’t hold up too well for modern readers.  That said, Captain America #1 (March 1941) is still a great book.  It features President FDR agreeing to fund a project to create “a character out of the comic books” to help the allied forces win the war for global supremacy.  We all know that story, but the back up feature, ‚ÄúCaptain America and the Riddle of the Red Skull,” brings Bucky and Cap face-to-face with Cap’s worst enemy of all time.  Plus, the cover has Cap attacking Adolf himself.  The birth of the legend.

5.  THE ORIGIN OF THE RED SKULL (Captain America #298-300). Just what it says.  I’m not sure it was necessary to try to make the Nazi supervillain into a sympathetic character (or at least to show he had sympathetic roots), but the tale quickly shows how took to sadism and cruelty without much effort at all.  Written by J.M. DeMatteis and illustrated by the great Mike Zeck.

4.  WINTER SOLDIER (Captain America 1-14). Yes, Ed Brubaker is so good that he deserves two places on this list.  The Winter Soldier story arc was Ed’s reinvention of Captain America as a character in the “real” world.  Previous writers, pretty much universally, had updated to world to suit Cap: Everyone in it, from muggers to politicians, admired Steve Rogers to the point that they’d throw away their petty conflicts to ooh and aah when Cap speechified.  Brubaker threw all that way, updating the world Cap lived in and then forcing Cap to adapt to it.  And the selection of artists, Steve Epting and Mike Perkins, was equally brilliant: Dark, heavy lines and muted colors, shadows, lurking and mysterious.  In this opening arc, Ed brought back Bucky–Cap’s always cheerful sidekick–but Bucky came back wrong.  Amazing.

3.  ULTIMATES VOL. 1 (Ultimates Vol. 1). A lot of folks dump on volume one because they say there’s no “story” in it, and because, face it, everyone likes to dump on Mark Millar these days, but to me the opening frames of Ultimates Volume 1 were the epitome of why I still read comic books.  They inspired, excited, and blew me away.  We see Captain America during World War II on his last mission before he gets frozen.  Through the volume, we watch him come to terms with being a man out of time, revived after a 57-year nap, struggling to find a role for himself in the world and to instill a dark, cynical world with the kind of hope he had been able to bring to the world when the biggest enemy was the Nazis.  Millar’s take on the character makes him a bit of a bully, but one with all the right intentions.  Especially when he gives Giant-Man one of the most righteous beatdowns in the history of comics.

2.  THE JOHN BYRNE RUN (Captain America 247-255). Hailed by many as the best run (before Brubaker came 2along), John Byrne didn’t transform the character (although he did provide a more detailed origin story), he just understood the character.  We got see Cap fight Batroc the Leaper, Baron Blood, Cobra, and Mister Hyde; team up with Union Jack; and even run for President.  This was when John Byrne was at the top of his game and could do no wrong.  Written by the legendary Roger Stern

1.  THE DEATH OF CAPTAIN AMERICA (Captain America 25-49). This is a very long story arc, beginning with Captain America #25, in which Steve Rogers gets shot on the courthouse steps in the aftermath of the Civil War, and ending right before Captain America: Reborn.  Throughout these 25 or so issues, we see Bucky Barnes a.k.a. Winter Soldier take up the mantle and, more importantly, the shield, to join up with Sharon Jones, The Falcon, The Black Widow, and other Marvel spies to find out who killed Cap, and why, while dodging Registration Act enforcers, Stark’s SHIELD, and fighting the best of the Captain America rogues gallery: Red Skull, Arnim Zola,
Doctor Faustus, Arnim Zola, and Sin. The writing is all Ed Brubaker, with art mostly by Steve Epting and Butch Guice. Superb, suspenseful, long-form storytelling.  This is one of the best long-form stories ever, not just the best Captain America story of all time.

NOVELTY PICK:  My personal favorite done-in-one Captain America from the Mike Zeck period, which is my personal favorite run of the character, was Captain America #267, in which he fought a gaily colored swordsman named “Everyman.”  Dude was basically a poor-man’s El Aguila with Montana militia sensibilities.  Cap defeats him on Liberty Island, right at the feet of the Statue.  It summarizes everything that was great about the early-1980s Cap. 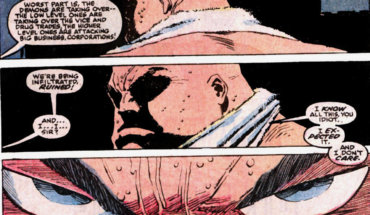 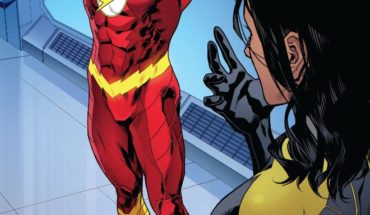 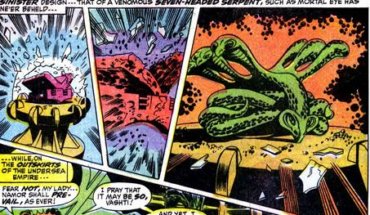