Continuing my regular column of comic book top tens, a focus this week on Marvel’s skull-shirted Charles Bronson wannabee.  Inspired by the reference to him in the newspaper headline read by the cabbie in the opening shot of the trailer for the 2010 Avengers cartoon.  A favorite regular comics column that I read, “Comics Should Be Good,” did a readers’ poll of the best Punisher stories, and nearly all were by Garth Ennis (duh).  And I agree that his work is by far the best in terms of readability (and re-readability)—but his vision is only one take on the character.  Other tales have helped shaped him, and their stories would make damn fine (and essential) additions to your comic book collection.  So my favorites include some Garth, but there’s more here, too . . . Plus, their list only went up to 10, but this one goes to 11!

P.S. Nearly everything is from the 2000s, which may be seen as a result of comics getting better, or the fact that I didn’t read comics for most of the 1990s. You pick.

11.  The Punisher 1-5 (1986), a.k.a. “Circle of Blood.” Written by Steven Grant and illustrated by the best Captain America artist of the 1980s, Mike Zeck, this initial series tried to soften up Punisher by explaining his homicidal tendencies as having been due to the involuntary ingestion of psychopharmaceuticals.  Remember, this was around the time of Alan Alda and the assassination of Ronald Reagan—crazy guys with guns weren’t exactly popular.  But the cover of the first issue still got away with featuring a gigantic Punisher, his back to the wall in a hail of bullets, armed and firing back.  It was good enough to get Punisher his own series the following year (with art by Klaus Janson). It gets on my top 11 not for the story so much as the art. Oh, and that cover of issue one. Whenever I think of Punisher, that’s the image that first comes to mind.

10.  “The Frankencastle saga” (2010). Go ahead, give me crap for this, but I’m standing by this entry.  First of all, the book that started the storyline, Dark Reign: The List – Punisher, was shocking—Daken versus Punisher, and Pun loses.  (Plus, art by John Romita, Jr.!)  Continuing in Punisher #11, we see Frank’s body collected and stitched together by none other than Morbius and the League of Monsters—a “team” that had been absent from the Marvel Universe for way, way, wayyyyyy too long!  I admit, once that story started getting going it dragged on too long and wore out its welcome, so I’m going to say you should read just these books: Dark Reign: The List; Punisher numbers 11 and 12 (for context); and then the current crossover four-issue storyline, “Punishment,” which begins in Dark Wolverine #88, and shows Frankencastle seeking revenge against Daken.  It’s not poetry, and you have to be willing to accept the premise, but it’s about the most mayhemic fun you’ll ever have reading about Punisher.  And yes, I made up the word “mayhemic” just for this piece.  Because no other word fits.

9.  Amazing Spider-Man #129 (1974). Gerry Conway and John Romita, Sr., introduced the character for the first time (and also The Jackal, by the way) on the very first page of this book, as Punisher assassinates a statue of Spider-Man.  That’s right, Spidey is the Punisher’s first target.  Like most “classic” Marvel tales, the two fight and then talk (why do they never talk and then fight?) until Punisher comes to understand that he can’t believe everything he reads in the Daily Bugle and the two end up being pals.  We don’t learn much about Big Pun’s past here, only that he is an ex-Marine.

8.  “Barracuda” (Punisher MAX #31-37 (2006)). What do the first Burton and the second Nolan Batman films; all the Lee/Ditko Spider-Mans; Johnny Cash songs; and Omarosa’s season on Celebrity Apprentice all have in common?  Great villains!  A keen understanding of the principle that a hero is only as interesting as his enemy is the backbone of Garth Ennis’ run on Punisher.  And the greatest villain created during this period was the cannibal with the cuss-words on his teeth, Barracuda.  Profane, nasty, and as macho as humanly possible, Barracuda is my favorite Ennis creation of all time.  He reappeared a few times and even got his own series.

7. Punisher Max “Mother Russia” (Punisher MAX #13-18 (2005)). The Punisher MAX story featuring Nick Fury and Russian spies.  Awesome, and a rare foray by Ennis into the rest of the Marvel Universe.  It grabs you by the shorthairs right from the start, and never lets up.

6.  “Small Wake for a Tall Man” (Punisher War Journal #4 (2006)). Matt Fraction and Mike Deodato present the funeral of Stilt Man, at which the villains paying respects all share their hatred of Punisher.  What makes the Ennis books so different is that Punisher isn’t really the star—the villains are.  Here, Fraction tells the same kind of story, only he does so with the “Marvel Universe” version of Punisher.  It’s truly unlike any other Punisher story, and it has a (literally) explosive ending.  The entire Fraction run represented the Marvel Universe’s reclaiming of Punisher, after Garth Ennis took him outside of that world.  There was never any attempt to match this Frank Castle, who fought supervillains, used gadgets, and idolized Captain America, with the adult-oriented, gritty MAX title.  Marvel deserves a lot of credit for this: The character can be different in different stories, and not everything has to fit

into continuity.  Incidentally, the Civil War tie-in (in War Journal 1-3) has Punisher and Cap facing off, in one of my favorite Punisher fistfights of all time.

5.  Punisher Meets Archie (1994). Yes.  That’s right.  A done-in-one drawn by the legendary John Buscema. Punisher mistakes Riverdale’s Archie for a crime lord on the lam, and hilarity ensues.  The best part is that only Punisher is drawn “the Marvel way”—all the Archie characters are in the old innocent Archie style. Best publisher crossover of the 1990s.

4.  The Punisher MAX: The End (2004). In this done-in-one special, Garth Ennis gives us the last Punisher story ever.  He’s managed to survive a nuke blast, and he goes after the coven of billionaires, politicians, and other fortunate ones who profited from it.  In killing them, Punisher kills off the rest of the human race.  Since this character has always had trouble defining “the line” between good guys and bad guys, wiping out all humanity seems to be poetic justice: There’s no need to draw the line anymore.  Nobody is good enough.  No potential for rehabilitation or redemption outweighs the need for punishment.  Brilliant.

3.  Born (2003). An Ennis MAX miniseries, with his “The Boys” artist (Darick Robertson) on art shores.  I actually thought this would be boring, since most war comics are, but it was in fact both brilliant and powerful.  In it, we learn that Punisher’s wife and kids being killed actually didn’t do all that much to change the dude.  Even back in Vietnam he was the way to becoming a homicidal maniac willing to kill anyone whose ideas of justice were different from his won.  It should be noted that Ennis wasn’t the first one to put Frank in a realistic wartime setting.  Back in 1992, Vietnam veteran Doug Murray’s series “The ‘Nam” brought Castle in for frequent cameos, which was a little strange since The ‘Nam was a fact-based semi-autobiographical series and The Punisher . . . isn’t. 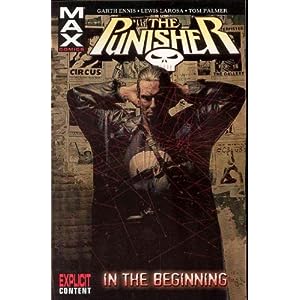 2.  Daredevil #183-184 (1982). I’ve mentioned these two issues before, as one of the greatest Daredevil stories ever, here.  So I won’t say more than this: Frank Miller does Punisher, and proves that the character has mad potential.  This was the beginning of a noir version of the character.
1.  “In the Beginning” (Punisher: MAX #1-6 (2002)). The Marvel Knights Punisher maxiseries “Welcome Back Frank” (2000-2001) was Garth Ennis’ Punisher debut, alongside Steve Dillon, but was a little silly and pretty clunky.  Also, I am not a fan of Steve Dillon (but I can’t debate its importance both to the character, who had stalled out in the early 1990s, and to Marvel (it helped inspire editor-in-chief Joe Quesada to start Marvel’s MAX lineup)).  Still, I’d argue that this storyline, the first one for the MAX imprint, was more important.  In it, Ennis brought back Microchip (the dude in the panel truck from countless lame 1990s Punisher storylines) as a traitor who is trying to arrest Castle for warcrimes.  In doing so, Ennis breaks Punisher from his capes-and-tights past both literally, by ending his relationship with Micro, and symbolically, by showing how that past betrays the potential for a well-drawn character.  It was Ennis’ way of saying that his Punisher series would be multi-dimensional, and would not be beholden to past visions of the character.  Probably the best retcon in history.
Honorable mentions:

Punisher Kills the Marvel Universe (1995). Another done-in-one that’s just a lot of fun.  It’s a What If? story, and the title says it all.
Jason Aaron’s current work. The jury is out on this, but Aaron is probably the best writer Marvel has in its stable.
Marvel Universe Vs. The Punisher. Also on sale now, written by Jonathan Maberry and drawn by Punisher MAX artist Goran Parlov, this series has great potential.