Continuing from yesterday’s megapost, today we have the not-quites…..

First, the ones who were bubbling under.  It took 19 votes out of the 200 to make the top 10, and these just didn’t make the cut—but I was surprised they didn’t get more attention:

And now, my personal top 10. I tried to pick the runs that most engaged me with characters who previously I found boring, or who I’d never bother to read about before, in addition to being transformative for the titular hero.  It was hard to limit myself to 10.  Like, I took Garth Ennis’ Punisher off my list because although the run is one of my favorite runs ever, it didn’t really change my understanding of the character.  Ennis just told great stories about him.
Here’s my list: I only wrote a blurb if the run didn’t make it on the list of the “real” winners.

I’d given up on the X-Men right about the time Claremont brought the Morlocks in.  It was just too much—the stories were frayed, there were a million characters to know about, and then this book came along.  I’d give this props based solely on their portrayal of the Danger Room, using the computer to tell the best evolution story in the history of science fiction.  After reading the “Danger” story arc, I finally understood how a computer could become self-aware.  And talk about reinvention—Whedon made a room into a character!  The characterizations of Kitty Pryde (and her relationship with the resurrected Collossus) and The Beast were tremendously powerful—as three-dimensional and touching as Whedon’s Buffy The Vampire Slayer series.  The entire run has recently been collected in a beautiful hardcover.  Oh, and John Cassaday’s artwork.  There, I mentioned it.  It’s . . . astonishing.

Really?  Not a single vote for the man most responsible for the Tony Stark in the Iron Man movie?  The first run is better than the second, but I think I like them both better than even Matt Fraction’s terrific, current work.  Why?  Four words: Demon in a bottle.  Why else?  James Rhodes, Justin Hammer,  Stealth Armor, Ant Man, Iron Man versus Hulk, Doctor Doom, the Mandroids, War Machine, Machine Man . . . That’s enough, innit? Keith Giffen and J.M. DeMatteis took a bunch of lame characters (Black Canary , Blue Beetle, Booster Gold, Mister Miracle, etc.) who either didn’t have their own books or whose books were on the edge of cancellation and made them a team.  A good team.  And, usually, a hilarious team.  In the first issue of their run, they set the tone with Batman punching Guy Gardner in the nose.  Possibly the most famous punch in comic book history?  Not only did they reinvent the hero-team dynamic, but they managed to give personalities to folks who had previously been little more than concept-heavy ciphers (like Martian Manhunter and Captain “Shazam” Marvel).  It’s a crime that this book never got an omnibus.

Of course, it was Sienkiewicz who was the reason I loved this book.  As it progresses, we see his art transform from “standard” styles clearly influenced by Gene Colan into the more abstract, conceptual work he would perfect on works like his Elektra miniseries with Frank Miller.  The Moon Knight book never sold well, and for a while it was a direct-market exclusive, but there was never a book I looked forward to more as a kid.  Previous appearances of MK were as a novelty act in Werewolf By Night and Marvel Spotlight.  In his own book, he got a much more elaborate backstory and went from being the poor-man’s Batman to a full-fledged, fully functional schizophrenic.

What made Walt Simonson’s Thor so great?  Well, he started by bringing in Beta Ray Bill, which was an invention and not a reinvention, but the character served as the perfect foil for the usually-better-than-everyone-else Thor.  It injected new life into an extremely stale series, and also gave Simonson the opportunity to explore Thor’s relationship with his father and other Asgardians.  For the first time ever, Thor was a fully realized character, not just a big hippie with a hammer who could beat up anybody else on the planet.  Plus, Thor into a frog.  And if that ain’t reinvention, I don’t know what is.

Ejecting Thing was a bold step.  But even bolder was introducing cheesecake pin-up gal She Hulk as a feminist who wasn’t afraid to sunbathe topless on the Baxter Building.  She Hulk actually became

interesting under Byrne’s run.  It’s possible that without it, she would have disappeared from the Marvel Universe forever.  Like Teen Hulk.  But Byrne also got votes for his work with the F4 in general, turning Sue into a woman (she changed her name from Invisible Girl to Invisible Woman); forcing Reed to come to terms with the indirect consequences of his interdimensional meddling by bringing him to court in an alien world; having Johnny date a future herald of Galacus; and making Superman-with-a-mohawk rip-off Gladiator, of the Shi’ar Empire, the foe in issue #250.  Perhaps the greatest fight sequence ever to grace The World’s Greatest Comic Magazine.

(This run was the inspiration for this entire idea for this post, actually.)

I suspect this didn’t get more votes because it has NEVER BEEN REPRINTED IN COLOR.  Shame on you, Marvel.  This run includes the greatest Spider story ever told (Nothing Can Stop The Juggernaut); introduces The Hobgoblin and the Black Costume; and included the “Kid Who Collects Spider-Man.”  Stern also tended to focus on side-characters and villains, adding a depth to the Spider books that I hadn’t experienced before.  It was a like an entire world was created—one that existed even when Spider-Man wasn’t on screen.  A run of pure genius that transformed Peter Parker into a three dimensional, sensitive 1970s man.

1.  Frank Miller, with Klaus Janson and David Mazzucchelli, on Daredevil (#3 on the “real” list)

A Panel From Every Issue of JLA, Frank Miller, Swamp Thing
Tweet Pin It 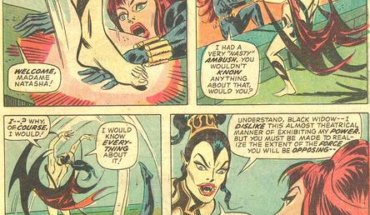 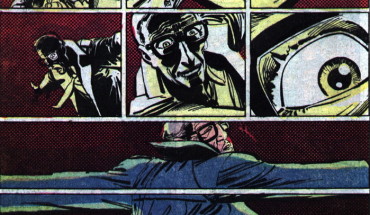