Hello and welcome to episode one of “Recent Reads,” wherein I review the trades I read since the last time I wrote a this kind of column. Since this one is the first, I thought I’d pick a trio that would be interesting to review together: Back to Brooklyn; Young Avengers Presents; and Pinocchio: The Vampire Slayer. I’m writing them up together because the first is a trade collection of a 5-issue miniseries (episodic long-form storytelling); the second is a collection of one-and-dones; and the last is a graphic novel, i.e., a single story told in one book. Oh, and all three are worth a read.

First, “Back to Brooklyn.” It’s actually labeled as a “volume one,” but I can’t imagine there will ever be a second. Damn near everyone dies in it. It’s a bloody crime story told by two of the masters of this genre: Garth Ennis and Brooklyn-bred Jimmy Palmiotti. The story is pretty simple: A Federal witness named Bob Saetta who goes back to Brooklyn to take care of loose ends. Specifically, the crimelord who has his wife and kid hostage. The crimelord who has a terrible secret that only Bob knows about. The crimelord who is Bob’s brother. The story weaves along, dropping information in bits and pieces, accented by the kind of tough-talk dialogue that makes Ennis and Palmiotti great. It’s not a perfect story: Overall, it’s pretty predictable, and pretty humorless. But criminal characterization is really what a reader hopes for from Garth Ennis, whose work on Punisher was special mostly because Frank Castle’s enemies were fully realized. And action-paced plotting is what makes a Palmiotti book so great. Both are here, in spades. It’s the conclusion that’s a little underwhelming–but I won’t give that away. The art is by Mihailo Vukelic, whose work I’m not otherwise familiar with. It’s quite realistic, and appropriate for a non-superhero tale, but it isn’t spectacular. I would have preferred something a little more shadowy. On a rating scale where a 5 is Batman: Year One and a one is War of the Hulks, I’m giving it 3.5 stars.  Worth buying, reading, and sharing, but essential only for completist fans of the creators.

Next, Young Avengers Presents. This is an uneven affair–a collection of one shots. You’ll find the work of Ed Brubaker paired with Paco Medina, and stories by Matt Fraction and Paul Cornell, and as you’d expect, these are very good. Others, though, are less interesting. Ultimately, Young Avengers are a team concept, and writing about them as individuals just doesn’t have as much appeal. Still, the stories have a surprising amount of depth to them, particularly the closing tale about Kate “Hawkeye” Bishop and Clint “Hawkeye” Barton (in his Ronin phase), by Fraction and Alan Davis. If you only buy this for this story, it’ll be worth your 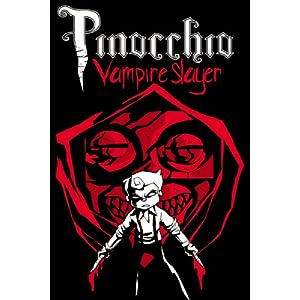 Finally, huge ups for Dustin Higgins and Van Jensen’s Pinocchio the Vampire Slayer. It’s funny, appropriate for anyone 10-years and over (if you’ve got 10-year olds who dig vampires, that is), and the black-and-white artwork is fascinating and nonlinear.  I like artists that straddle the line between conceptual and literal, and Van Jensen is a master at this.  (It’s also a style that particularly lends itself to black and white.)  As for the story, it makes perfect sense, doesn’t it? He’s made of wood that continually grows, with a point at the end, every time he lies. Perfect for slaying bloodsuckers! I’m sure you’re tempted to write this off as a concept-heavy nonstarter, but give it a chance. The splash page, which provides a one-page synopsis of the original Pinocchio novel, should suck you in, and the quick hunt that follows it should keep you intrigued. With costars like a ghostly cricket and two evil, shapeshifting businessmen, I think it’s safe to say this is not like any other book that’s come out this year.