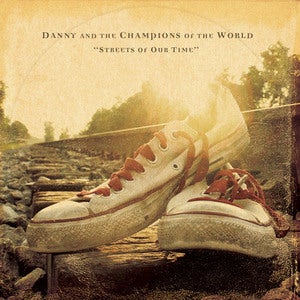 “Henry the Van’ is the first cut on Australian Danny George Wilson’s latest record.  It’s a funeral for a friend, who is a car.  “Guess we could try to fix you up . . . Maybe go for an easy roll once in a blue sky . . .”  The concept may be funny, but it’s a lot more touching than most songs about actual people who’ve died.  This is a testament to Wilson’s skill, imagination, compassion, and his ability to communicate.

You may remember Danny George as the singer-guitarist of Grand Drive, a much-loved Americana group, but his solo venture is far, far more interesting.  And make no mistake: This is a Danny George Wilson production.  Despite the harmonies and quality musicianship, Danny and the Champions of the World are really a solo venture.  Wilson most closely mirrors Neil Young’s country rock phrasing, and sometimes the similarity is almost uncanny, but his voice is unique: It’s cheery and optimistic, even when singing about getting old and being sad, and it’s romantically simple.  The lyrics are direct and uncomplicated, but ring true, powerfully: “I wanna feel your hand in my hand tonight . . . Just trying to get back to what we used to be/Just trying to get back to something to believe/Looking down at these restless feet.”

If this album doesn’t make you feel something, maybe you’re dead inside.

And Juno’s got it for thirteen bucks.

Henry the Van (the second best song about a van I’ve ever heard.  The first is “Chevy Van” by Sammy Johns, available on the Rhino “Sounds of the ’70s” collection.)