Shazam! The Monster Society of Evil

The creator of the wonderful Bone series tries his hand at the manchild hero. The great thing about Shazam! is the innocent silliness attached to his legend: Villains are worms, his sister is also his rival, and his best pal is a talking tiger. Smith embraces this without letting it be corny or contrived. This is, hands down, one of the greatest books to read to children because, as an adult, you’ll appreciate some of the complexities and humor that will be over the heads of littler ones who will smile at the characterizations and marvel at the artwork.
-Ekko The Umbrella Academy is written by Gerard Way of My Chemical Romance. Full disclosure: I dig the band a lot. But this comic stands alone. It even won the 2008 Eisner Award. This was the first series (a second one came out in 2008), and it totally rocks. It’s about a fucked up old dude who adopts some orphans (what else would you expect from the guy behind The Black Parade?) and trains them to be a superhero team.
-Mysterious Comic Book Guy 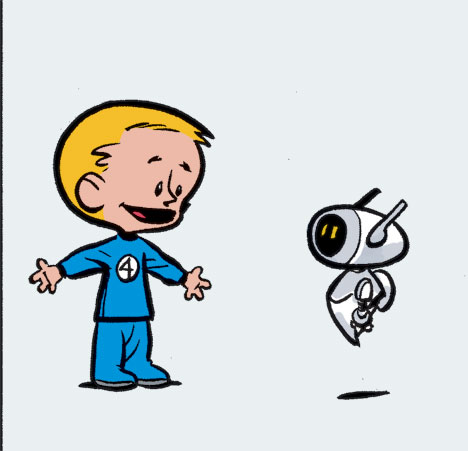 Franklin Richards: Son of a Genius

Joe Queseda deserves praise for trying to lighten the darkness of the MU by producing some kid-friendly books that are smart and show the breadth of characters available—and that kids and adults can read together without either being bored or embarassed. And Franklin Richards is the flagship of this brand. Chris Eliopoulos’ Calvin-and-Hobbes artistic style is the perfect tone for this Dennis the Menace meets science fiction fantasy. Recent issues have lagged—perhaps Mr. Eliopoulos is burning out—but it is the book that my kids most look forward to when I return from the comic shop. Indeed, the entire Marvel Adventures line deserves praise. Wolverine First Class is another generally praise-worthy addition to the adult/kid canon—especially the issue with Shang Chi. I’ll even throw X-Men First Class in here, too, but that book was pretty uneven overall (and Uncanny X-Men First Class is even worse). Oh, and the other really cool thing about Franklin Richards is that it ties into the Marvel Universe . . . Sort of. They’ve had Skrull Invasion stories, more as a reference than in Marvel continuity. A truly fun book.
-Ekko

Mark Millar and Steve McNiven
2008-09
Much like with The Dark Knight vision of Batman in his old age, Millar and McNiven did the unthinkable–amidst the clutter of about 372 different Wolverine titles and teams, they made a completely original Wolverine story set in the future towards the end of Logan’s life. At the outset, all the reader knows is that there was a massive wore of the capes and the villians won. Something so heinous happened to Logan that he hasn’t popped his claws in decades. Logan has retreated to life as a farmer, raising a small family of his own. When the Hulk’s kids show up to collect their rent money, Logan is forced to accept the proposal of a blind Hawkeye to run him cross country in the Spider-mobile for an as-yet-to-be-explained mission. And it just gets more and more kick ass from there. This title spun out of Wolverine and essentially became its own mini; Dark Wolverine took its place from there. The only complaint on this book is the fact that it’s taken FOREVER to complete. As of this writing, the final issue still doesn’t come out for a week. Seriously, though, I might go so far as to call this one the book of the decade. It’s certainly in my top three.
-CD of Les Enfants Terribles

Next: A few more 2008s (those that are still running into the next decade), and the conclusion!