Home
Earth's Mightiest
THE GREATEST COMIC BOOKS OF THE DECADE: Part One: 2000-2001

This website has been all about indie rock and underground rap since 2004. But this year on Berkeley Place, we began running regular features about our other long time love: Comics. In the process, we’ve become acquainted with a few folks who share that passion. Since the decade is winding down, we thought a retrospective of funnybooks for the past 10 years was in order. But how to ensure that it isn’t just our narrow interests that are reflected? How to capture the breadth of some of the brands we don’t read, like westerns, war books, and most D.C. comics? Easy. We asked our friends.

Over the course of this multi-post articles, you’ll find the selections of me, Ekko, your regular emcee, as well as the following distinguished luminaries:

Chris Daly is the proprietor of Les Enfants Terribles, which is primarily a music site, and the author of semi-regular articles about comics for Berkeley Place.

Greg Hatcher does the weekly “Fridays With Hatcher” at CBR’s Comics Should Be Good, and has taught comics and cartooning for fifteen years as part of the AfterSchool Arts program in Seattle Public Schools. He picked ten books for this post, with disclaimer: “Well, you have to bear in mind two things — one, I don’t read everything. And two, my tastes tend to skew towards adventure material.” He added that he’s a Grant Morrison fan “but the comics that really blew me out of my chair in the 2000s weren’t from Mr. Morrison.” He concluded: “I could keep going for another ten, easily — comics are in a great place creatively right now and there’s a lot of good stuff out there if you’re willing to look outside the capes-and-tights crowd a little.”

Mike Raicht is the co-writer, with Brian Smith, of “The Stuff of Legend #1 and 2,” with amazing art by Charles Paul Wilson III and beautiful design and coloring by Jon Conkling and Mike Devito. It comes out through Th3rd World Studios. You can order it directly from Th3rd Wolrd by going to www.th3rdworld.com and then clicking on their STORE. You can also check out MIKE RAICHT’S CREATURE FEATURE #1-3, tales of 70’s and 80’s horror from some of today’s best writers (Chris Yost, Moore and Reppion, CB Cebulski, Stuart Moore, Brian Smith) and some great up and coming artists. A fun little horror anthology where humor and horror collide. In December, you can find him in What If? World War Hulk #1 and Batman: 80 Page Giant. But as the editor of this website, I’m gonna take the liberty to say that “Stuff of Legend” is tremendously good and you should check it out.

Miguel Rodriguez runs TheHeroBlog.com, which has superhero news updated daily. He “read[s] a lot of comic books.” You should check him out.

Mysterious Comic Book Guy has nothing to promote, and he writes for a Major Comic Book Blog. He doesn’t want to let on that he’s writing for this little blog, but he’s a cool dude who wanted to add to your X-Mas shopping list. So we welcome him.

John Barringer has been reading comics for over 13 years now and is currently the creator and contributor to A Comic Book Blog.

Frank Miller and Lynn Varley
2000
Seen the movie? No? Good. The book is much better. Back in the 1980s, Miller was one of the first to turn superhero stories into something adult, tackling child abuse, drug addiction, love and murder with maturity and depth, without sacrificing excitement. He was also the prime mover from drawing comics the Marvel way to making them gritty, and not suitable for all ages. Then, all the way back in 2000, Miller managed to combine history, myth, and fact, seamlessly, into a brilliant and beautiful work of art. Hardcover independent comics aren’t so strange now, but this was one of the first. Is there any question that this deserves to be the first book listed in this “Best of The Decade” retrospective?
-Ekko 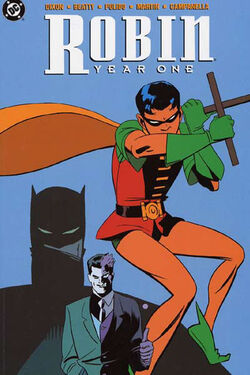 At the beginning of the century, Dick Grayson had been around so long, he wasn’t even Robin anymore. As a legend, Batman’s sidekick had been presented in countless TV shows, cartoons, comics, novels, and gay jokes. Let’s face it, he was getting stale. He needed a relaunch. But another lazy retelling wouldn’t do.
Everyone’s doing a “Year One” nowadays, but that wasn’t the case in ’01 when Chuck Dixon and Scott Beatty teamed up to tell the tale of an orphan becoming the ward of Gotham City’s most frightening character. The nice thing about Robin: Year One is that it doesn’t spend a lot of time on Batman. It’s truly about Robin: What it was like for him to lose his parents and get adopted by a creepy millionaire, how his early days with Alfred were less than easy, and how Dick Grayson managed to stay chipper—or at least, happier than his dark, brooding patron. It’s a nice companion piece to Frank Miller’s All Star Batman and Robin. Unlike the Miller stories, though, this one has a less-than-melancholy mood. It’s nice to see a Batstory with optimism.
-Ekko

I’m a bit biased on this one. I was an assistant on this book and then eventually took over as Editor. I also wrote an Exiles special called Exiles: Days of then and now. But that being said, this book is still one of my favorites to go back and read. Especially those first two or three years of the book. It was a place where anything could happen and in those first few years of the book anything did. We killed characters, brought new ones in, destroyed worlds, killed heroes, saved civilizations, got rid of the main character, Blink, and then brought her back. It was a book I was proud to be a part of and I think a lot of the run still holds up today. In an era of crossovers and big events, Exiles had those every month, and to experience the whole Marvel Universe all you had to do was read this one book.
-Mike Raicht, author of The Stuff of Legend

Sure, this title is really just an excuse to string together a bunch of “What If”?s. But what sets this series apart from its alternate-reality-visiting sibling is Judd Winick’s character development amidst an ever-revolving team roster. You never know when one of your favorite (or least favorite) members will be sent back to their own reality – making the team dynamic very…dynamic. Heroes that seemed like bit players suddenly become leaders, and leaders who you thought were staples suddenly disappear. Truthfully, this title is hit and miss throughout its run. But the high points definitely outweigh the lows. The big payoff comes around issue 70 with the “World Tour” storyline. Our band of heroes jump from alternate reality to alternate reality in an attempt to stop the evil, body-snatching Proteus. New Exiles join, established Exiles die, and the team feels the ramifications of their losses for some time.
-Miguel of TheHeroBlog.com

Grant Morrison and Frank Quietly (and other artists)
2001-04

Starting with issue 114 and running through issue 154, Grant Morrison and artist Frank Quitely turn the book’s focus away from “mutant super-team” and instead zero in on the X-men’s roles as teachers at Xavier’s School for Gifted Youngsters. We quickly find that the threats from within the school are worse than the threats from without. Drug use, rebellious youth, Emma Frost, the death of a couple of major characters, and the tragedy at Genosha all play a part of this epic run.
-Miguel of TheHeroBlog.com

Before this relaunch of the Daredevil series, the character’s origin was a rare example of an origin that had not been told and retold to death. But the comic series had been cancelled, a victim of bad sales and lackadaisical creative teams. There’s nothing really new here, but it’s told through a series of letters from Matt Murdock to Karen Page, deceased, the first woman he loved. It’s touching and powerful, and provides insight into DD that even Frank Miller had never bothered with. Continuing on the path of psychological exposition is Hulk: Gray, which retells the origin of The Strongest One There Is via a series of conversations between Banner and his shrink, Doc Samson. And both series feature the art of Tim Sale, who is particularly adept in Hulk: Gray, at juxtaposing an almost cartoonish Bruce Banner against his monstrously thick giant alter ego. Actually, you won’t go wrong with any of Loeb and Sale’s “color” books. All good stuff. These two are just my personal faves.
-Ekko

A two-issue mini on D.C.’s “Elseworlds” banner, Superboy’s Legion tells the story that would have happened if Jor-El drove drunk, programming his baby refugee’s rocket to hit an asteriod instead of Earth, where it sat until the millionaire who funded The Legion of Super-Heroes (in our reality) found it. It’s a cool story, and since most What If?s suck, it’s worth a vote from me.
-Mysterious Comic Book Guy