1.  First of all: Spider-Man movie news. Spider-Man 1 and 2 were fantastic, 3 not so much.  But Raimi will return for the fourth film, which will begin shooting in March 2010.  The script is being developed with Gary Ross, who we’ve heard will also direct a Venom film at some unspecified date in the future.  I’m a little disappointed—the Venom talent being involved suggests that this will be another symbiote story.  Carnage is just like a red Venom and I was hoping for The Sinister Six.  But with Raimi on board, there’s at least a strong reason to hope that the movie will live up the promise of numbers 1 and 2.  But maybe it won’t be Carnage, anyway.  Raimi said this, on MTV:”[Peter Parker] has to grow in a way to overcome the villain, because there always seem to be stories of coming of age, of a young man growing up and learning things about life, so once we are identifying the exact movement that Peter has to grow to.  I think the villain—and we’re trying this right now; we’re trying to choose a villain based on who would be the proper counter to that growth, so we really have dramatic conflict.”  A villain that is counter to coming-of-age growth?  Seems like that was done already—Sandman had to face his responsibilities, but chose the wrong path.  Maybe it’ll be Vulture.  He “came of age” thirty years ago, being that he’s an old man . . . 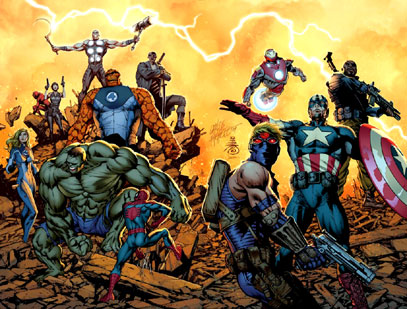 2.  “New Ultimates.” I was a huge fan of the Millar “Ultimates” books, and the Bendis Ultimate Spider-Man was great, even if it got a little stale at the end, and Ultimate X-Men was great at the beginning but showed steady decline over the years.  Ultimates 3 and Ultimatum?  Not a huge fan.  I didn’t hate them as much as everyone else seems to have, but it’s undeniable that they lacked the spark and quality of the rest of the Ultimates lineup.  I’m waiting for the trades to catch up on the relaunch—my pocketbook only goes so deep, and Marvel doesn’t send me press copies—but after the Baltimore Comic Con, Marvel announced another series: “New Ultimates” by Jeph Loeb and Frank Cho.  Yeah, Jeph was behind Ultimatum, but he has done some great work as well (such as his “color” series, including Hulk: Gray and Daredevil: Yellow).  And as for Frank Cho, the man is amazing.  The team will fight cosmic, world-threatening enemies, and it looks like we’ll be seeing Valkyrie, Iron Man, Cap, and a brunette with a large axe.  Marvel will also be publishing “Ultimate X,” which will have something to do with the few mutants who survived Ultimatum.

3.  The Avengers. Iron Man’s Jon Favreau won’t direct The Avengers movie.  I for one am happy about that.  I liked Iron Man, but most for its “human” scenes.  I found the action sequences hard to follow, and the “big boss battle” at the end was too dark to see.  Avengers needs someone who knows how to pull back and show spectacle.

4.  An “it’s about time” moment: This November, D.C. will feature an all-Chinese team of heroes called “Great Ten” in a 10-issue miniseries.  Created by Grant Morrison in the weekly series 52, the Great Ten were introduced as a team operating under the auspices of China ’s government.  There are more Chinese people than any other nationality on the planet.  They should at least have 10 heroes.

5.  Deadpool is the new Wolverine. In the next few months, Deadpool will celebrate issue #900, complete his two miniseries (both of middling quality, and neither as good as his regular series), will be featured in the Black Panther DoomWar series, and will be a part of several other Marvel “events.”  Calling his latest issue #900 is an obvious nod to his overexposure, and being self-conscious is a trademark of the character, so, yeah, it’s funny.  But writing Deadpool—and writing him well—is difficult.  The recent “Suicide Kings” miniseries, for example, was far too dark to be good Deadpool.  I am afraid that Marvel isn’t protecting this property—it requires a lot more care and nurturing than Wolverine, whose character can be drawn in fairly simplistic terms (say “bub;” pop claws when angry; be a grouch; and say he’s the best at blah blah blah) and still be effective.  Deadpool is a more complex character, and when he is oversimplified he is, quite frankly, boring.  He’s no better than Punisher or Terminator or a host of other gun-totin’ antiheroes.  Even Foolkiller.  So, Marvel, I hope you reign him in.

6.  Brian Singer recently said he wants to do another X-Movie, but he’s committed for several years to other projects.  In other news, there’s apparently a Magneto script complete, but it’s about him as a kid so they won’t be using Ian McLellen.  Is anyone really interested in a Magneto: Origins film?  I’m not.

7.  Apparently, Geoff Johns (of Green Lantern Rebirth and Darkest Night), will be writing a story for the Smallville TV show that will feature the Justice Society.  Smallville has suffered this season—it’s become too dark and the stories are choppy, even if S-boy is finally rocking the black “S” T-Shirt.  But the series always was pretty hit-and-miss.  With Geoff, signs point to “hit.”  The ep should air on 1/29/10.  Mark your calendar.

8.  And finally, speaking of Baltimore Comic-Con (as I was in point 2, above), I want to give special thanks to Rob Liefeld. The line to meet the man behind Deadpool was over an hour long, but he allowed my ten-year-old son, who was sporting a home-made Deadpool T-Shirt, to come behind the table and share a few words.  Tremendously nice guy.  And Rob, I hope someone passes this along to you: You made a huge impact on my little boy’s life.  He was smiling for days afterwards, and kept talking about how he’ll never forget that day.   Jeez I wish I’d had a camera.  From one dad to another, Rob: Thank you for creating that memory.