Home
Berkeley Place
THE BEST AND WORST X-MEN, X-VILLAINS, X-WOMEN, AND RELATED CHARACTERS OF ALL TIME

My youngest is, as I write this, watching the first X-Men movie again (for the 5th time?). Such a great film. And lately, I’ve been ripping through Joss Whedon’s astonishing run on Astonishing X-Men (the best X-book of all time, hands down) and the pretty nifty Ultimate X-Men bound volumes (Mark Millar is becoming one of my favorite writers, and I really dig Kubert’s art as well). Add to that list the current Deadpool books, Wolverine First Class, Claremont’s pretty-good-but-too-soon-to-tell return to the X-Men, and you’ve got a renaissance for X-books.

So, being a list fan . . . Here’s my favorite X- (and X-related) characters of all time. And my least favorite.

15. Longshot. Why? As drawn by the great Art Adams, complete with a cool sword, Longshot was the best looking straight guy in leather. I know lots of readers will be pissed that Longshot knocked Gambit off the list, but deal with it. I’m not a big Gambit fan.

14. Storm. Why? Her relationship with Black Panther, her backstory as a claustrophobic pickpocket, and her pure white hair.

13. Armor. Why? From Astonishing X-Men, she can create some kind of force-field/armor. Yeah, the name isn’t very imaginative (but see “Strong Guy,” below), but she’s a great, well-written character.

11. Kitty Pryde. Why? Her first walk through the danger room was priceless, and her fight against the brood in X-Men #143 was one of my favorite stories of the ’80s.

10. Jean Grey. Why? I know lots of folks love Marvel Girl, but I always thought she was a second fiddle, made interesting because of her relationships with men. The Phoenix stuff was awesome, of course (at least the first time), but how many times can she die and come back? It gets a little tedious. That’s why she doesn’t rate higher. But she was one of the originals, and, let’s face it, the death of Phoenix was one of the most important and influential comic book stories of all time.

8. Rogue. Why? Avengers Annual #10 is one of the greatest comics of all time, hands down, and her power is one we all wish for: To absorb the powers of others.

7. Deadpool. Why? If you’re not reading the current Deadpool series, you’re a shmuck. He’s not really an X-Man–he got famous in Cable and Deadpool, and I don’t think he ever appeared in a proper X-book–but he’s part of Wolverine’s backstory and he’s cool-as-hell. He can regenerate even after being beheaded!

6. Scarlet Witch. Why? She has the power to change probabilities. She also could have been on the villain list, but I prefer her as a hero (even though she was really more of an Avenger than an X-Man).

5. Nightcrawler. Why? He’s got a cool power–he can teleport–but when he uses it, he stinks. Literally. His portrayal in the X-movies was awesome–my favorite live-action hero, at least cgi-wise. Plus, he’s got a sense of humor, something often lacking from the mutant books.

3. Cyclops. Why? He’s the conflicted leader with the lame power but the coolest look. He’s a great character in the books, but in the movie they kinda turned him into white bread.

2. The Beast. Why? Hank McCoy’s struggle to find a cure–which led to him being covered in blue fur–is the most tragic/funny tale in X-Men lore.

1. Wolverine. Why? I hate to be cliche, but Wolverine is the coolest. He’s got the most complex backstory, and exemplifies why humans love/hate mutants: They make great weapons, but they’re terribly hard to control. 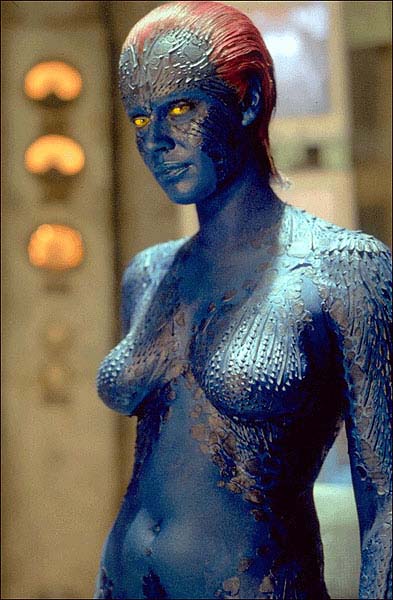 10. Mystique. Why? You did see the X-Men movie, right? If you didn’t, both reasons can be seen in the still shot, above. 9. Danger. Why? The story of how the danger room became self-aware and capable of independent thought, but could not escape its own conscience clause, is a remarkable, deep, and seemingly possible sci-fi tale. Who’d have thought that one of the most tortured, well-written characters in comics would be a sentient machine?

8. Sabretooth. Why? ‘Cause he’s the anti-Wolverine.

7. Pyro. Why? His look is awesome–portable flame thrower and all–and his power is terrifying: He can control flame.

5. The Brood. Why? An alien race that looks fucking awesome and tries to eat Kitty.

4. Emma Frost. Why? Looks alone, of course. Looks alone. Doesn’t seem to matter who draws her, they all make her look something like a playboy bunny. Sometimes, she’s a hero. But I like her best as a villain. 3. Magneto. Why? He’s one of the most complicated villains in history–a Malcolm X to Xavier’s Dr. King.

10. Strong Guy. Why? If you’re not going to bother to make a name for the dude, why create him in the first place?

9. Slipstream. Why? The poor man’s version of Silver Surfer.

8. Thunderbird. Why? This is an example of tokenism at its worst. Claremont wanted to show how interracial his new X-team could be, so he invents a Native American mutant but fails to give him any kind of cool power. He just makes him kinda tough. And then he kills the guy on the team’s second mission.

7. Maggot. Why? He’s basically a dude with a tapeworm living inside him so he basically can eat anything. Since when is being a host to a parasite a power? Basically, all you have to do to be an X-Man is eat bad sushi?

6. Cable. Why? Dude makes no sense both as a character and as a mutant. I guess he has powers, but mostly he uses a gun that’s bigger than his torso. Which is also steroid-huge.

4. Forge. Why? He can invent cool stuff. So can Steve Jobs.

3. Dazzler. Why? A mutant whose main power is that she’s a light source. Why?

2. Jubilee. Why? A mutant who is actually less powerful than Dazzler. But at least Dazzler was hot.

1. Professor X. Why? It wasn’t until Ultimate X-Men that someone finally figured out that having the world’s most powerful telepath as a team leader and political organizer basically means that he could get the world to do whatever he wants anyway, so why does he struggle so much? He’s a character who has never really made a lot of sense–sometimes he’s like a civillian version of Nick Fury, but mostly he’s like Charlie from Charlie’s Angels. Only unlike Charlie, who was just a little squawk box on a desk, Xavier is powerful enough to do all the work himself, so why does he keep sending all his children into harm’s way?