I don’t review comic books here, generally, although I may start doing so.  Increasingly, I’m discovering (thanks to my two boys) that comics have come along way since their low point in the late 1990s.  And I’m not talking about indie books, I’m talking Marvel.  X-Men is still an over-crowded, jumbled mess with far too many Wolverines running around, but the relaunch of New Mutants is proving to be a fantastic effort.  Now, I’m a 1970s-80s comic nerd, so I missed out on Legion–he’s the villain in the series—but my ignorance doesn’t detract a bit.  To his credit, Mr. Wells doesn’t waste a lot of time backstory or exposition: He assumes your knowledge, but doesn’t punish your lack of it.  In other words, I can figure out what’s going on pretty easily, and I dig it.  I wonder if the return of Chris Claremont to his own X-Men book will be equally as good?  Claremont was one of my favorite authors up until about Uncanny X-Men #200, but when I look at those books now, they seem wordy.  I’m hoping he hasn’t lost his touch for crafting great stories, but has learned a little bit from the Frank Miller school of letting artists tell the story, too.  (This isn’t to say that verbal economy is always good—Grant Morrison is unintelligible, largely because he refuses to tell the reader what the hell is going on.) 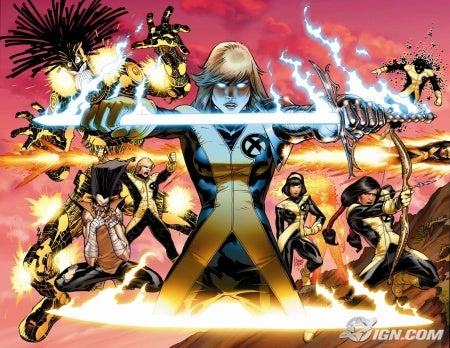 More than the New Muties, though, I’m here to write about the Amazing Spider-Man.  It was my favorite comic, hands down, when I was a kid, and it’s fast becoming my favorite again.  I know most people today favor the heavy-handed grit of Punisher (which is also pretty good these days, what with his Ant Man helmet and Iron man repulsors) or the pseudorealism of Daredevil (excellent) or the cynicism of Captain America (also excellent) or the adult humor of the new Deadpool (again, excellent), but for me, at bottom, the best comics will always be fun.  Yeah, it sucks to fight supervillains, but it’s fun to swing on webs and jump around and be twentysomething forever.  If it’s not fun then, eventually, the comic book will become a slog.  (See Batman.)

I’ve been a fan of Brand New Day since its inception.  The conceit (a deal with the devil essentially reboots a franchise) was kind of stupid, but I accepted it as a mechanism to get Spidey back to his roots.  I’ve loved that the book has stayed clear of most of the downright depressing details of the Marvel Universe–ever since they killed Cap, the MU has become dark and, frankly, overly interwoven, making staples like The Avengers basically unreadable.  Brand New Day has been about introducing wild new villains (Freak, Menace, e.g.), and even managed to tell a pretty complex tale of betrayal and police corruption without becoming heavyhanded.  It comes out three times a month, so there’s a few missteps (the Jackpot story and the Flash Thompson tale are two), but on the whole, the book is both reliable and suitable to read with your kids.  If your kids were old enough to dig the films, they should like this, too.

In the latest storyline, “American Son,” Spidey ventures a little too close to the mainstream Marvel Universe: It’s a Dark Reign crossover.  Dark Reign is terrible.  That the villains have been able to take over the world makes sense in the post-Civil War MU, but it’s still a truly bad idea.  It was one thing when the X-Men made the world so cynical that you felt dirty after reading it.  It’s quite another for the entire universe to be that way.  Note to the Marvel editors: Clean up your acts and get back to making good, self-contained stories about heroes.

But “American Son” doesn’t jump in to the drudgepot with both feet.  Instead, we get to see Harry Osborn and Peter Parker tease J. Jonah Jameson (who is now, in a brilliant comedic move, the mayor of NYC), pick up chicks, and come to accept Aunt May’s pending nuptials to J.J.J.’s father.  At the same time, the book shows depth and evil as Norman Osborn draws his son into his evil web . . . Or does he?

Much of what makes Brand New Day great is that it spends most of its time on Spider-Man, and Parker is a backstory.  Author Joe Kelly is clearly increasing Peter’s facetime here, but it seems to be for a purpose—not just backstory.  And while in costume, the book continues to be, well, Amazing.  Spidey’s rooftop reality check with Wolverine, in which Logan essentially dares Spider-Man to kill Osborn, is both funny and meaningful.  Wolverine is older than about five Spider-Mans, and he shows the kind of father-figure wisdom here that’s also apparent in his relationship with Kitty Pryde (in my son’s favorite current book, Wolverine: First Class).  Oh, and I have to mention Phil Jimenez’s artwork, too.  The panels in which Spidey uses Norman Osborn as a human piñata captured movement like it was animated.  I can’t wait to see how he draws The Dark Avengers in the next issue, on sale this week . . .