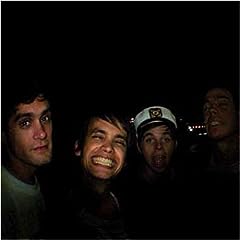 “And Girls Club” is fifteen songs, most clocking in at about 2 minutes, by two rough and crunchy pale-as-vampires brothers, and two of their friends, who have been playing music for about six years, recording with Mighty Hannibal and Roky Erickson, and sharing the stage with the likes of Daniel Johnston, Black Lips, Jay Reatard, and No Age.  It’s time for them to be heard.

On the album, “Then” is the obvious single: It’s simultaneously slow and fast, like Buddy Holly’s “Peggy Sue,” and it’s catchy as hell.  It’s also pretty different from the rest of the album, which sounds like Standells covers of Steppenwolf.  When it comes to obvious double entendre, “This Girl Taught Me a Dance” is about as subtle as the blues classic “Walking the Dog,” but it’s fun in its garage-y fuzz, which is why I’m putting it up as a taste track below.   “They’re Building the Death Camps” is far more conventional musically, with its 1950s guitar solo (single string plucking) and riffs.  The lyrics are nearly unintelligible (as with most of The Strange Boys songs) and the vocals are even more strained than Bob Dylan (again, a standard issue in SB’s catalog), so don’t bother trying to figure out if the title relates to the content.  It’s enjoyed best played loud on crappy car speakers while driving through a
tunnel.  Other songs have titles like, “Should Have Shot Paul,” so you get the idea: These guys are out to rouse rabble.

Last year I wrote about Nobunny, and nobody heard of him before or since.  I hope the same isn’t true for The Strange Boys.

For fans of: The Black Keys, The Black Lips, Nobunny, and The Ramones.

This Girl Taught Me a Dance (YSI)