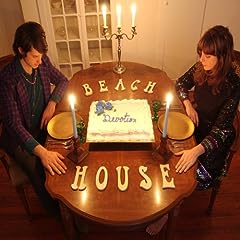 I missed the (apparent—according to Pitchf—-k) phenomenon that was Beach House’s debut record. However, I’ve been lucky enough to catch the follow-up, and it’s amazing. The Baltimore duo has been called “dream pop” and “indie rock,” and comparisons have been made to Mazzy Star, Sia, Galaxie 500, Slowdive, and Nico.

But these descriptions barely do them justice. Devotion is more of a mood than a record—I wouldn’t recommend driving to it—and it succeeds where so many others get old before side B. This is music that will force you to shut down your other senses and allow the sound to cover you—echoey organs, mournful but never predictable guitars, and the perfectly pale, ghostly vocals by Victoria Legrand make the album consistent without being redundant. Because under the washy, wall-of-dreampop, there are hits of folk and rock that burst through like fireworks on a starry night.

If you’re like me, you think the Cocteau Twins haven’t released anything good since they jumped to a major label back in the late ‘80s. If it’s that sound you’re looking for—sort of a no wave shoegaze–then this is for you.