There’s been lots of rumors, some in comments on this blog, that Grow Up and Blow Away, the 2001 album by indie darlings Metric, was never officially released. That may or may not be true (perhaps it was just illegal leaks that had circulated for years), but we can all be grateful that Last Gang Records released it this year. I’m calling it a reissue. If I’m wrong, then change this list to the top 9 reissue/remix albums. (For those who don’t recall, Emily Haines, the lead singer of Metric, is your fifth favorite indie gal in history.)

The Twist-Metric (From Grow Up and Blow Away) This South Bronx band formed by the three Scroggins sisters was hugely influential on hip hop and post punk bands like The Talking Heads. Their first full-length album, 1983’s Come Away with ESG, was really their only album (the reformed later, but it was used as a sample bed by dozens of rap producers, appearing on songs by everyone from the grimey (Wu Tang) to the bubblegum (TLC), old school (Big Daddy Kane) to underground (J-Dilla), and even The Beastie Boys. It was so cool when this popped up on emusic–I’d never heard the entire record before, and it was quite a treat.

8. Counting Crows-August and Everything After (Deluxe Edition). One of the greatest albums of the 90s, rereleased with live versions of virtually every track, demos, and outtakes. It’s astonishing how they reinvent the songs when they play them in concert.

7. Os Mutantes-Everything Is Possible! (Greatest Hits collection). That bossa nova sound you hear in the music of Beck and Cibo Matto might just have come from their having heard Brazilâ€™s psychedelic rock stars Os Mutantes. About a decade and a half ago, I went through a big 60s garagedelia phase, studying the likes of Moby Grape, The Standells and, of course, Os Mutantes. Of all the bands Iâ€™ve heard, their music is the most formidable. Many will quibble as to whether this is truly their â€œbestâ€ or not, and Iâ€™m not getting into that here. Thereâ€™s enough on the album to show how they pushed the genre far beyond its obvious limits, bringing rootsy, traditional music into a field usually designed only to be trippy. Itâ€™s great to see their hard-to-find (and largely out-of-print) work collected, and especially great to see it carried on emusic.

6. Radio 1’s Live Lounge – Volume 2. Technically not a reissue, but most of the covers on this double-CD collection had been ripped from the great Radio 1’s programming months or years earlier. The album features covers and originals, performed live by artists like Foo Fighters, Amy Winehouse (who covers the Zutons’ “Valerie”), Biffy Clyro (covering the ubiquitous 2007 track, “Umbrella”), KT Tunstall (covering Bloc Party’s, “The Prayer”), and my personal favorite, Corinne Bailey Rae covering JT’s Sexyback. Most of these gonzo gangbang albums are kinda weak, and don’t hang together too well, but this one manages to bat .400, and it’s two CDs at that!

5. DJ Muggs vs. GZA-Grandmasters The Remix Album. (review) Lots of great rap reissues/remixes this year, including this remix of one of my favorite rap albums ever. I believe that GZA is the most underrated Wu Tanger, and this proves my assertion.

4. The Killers-Sawdust. (Review) Okay, so I may not be the biggest fan of Sam’s Town, but it’s a solid B/B- album. Hot Fuss, however, is one of my all-time favorite records ever. Three songs from it are in my iTunes top 10 most played. And about half this album is of that era. A great collection.

3. Boot Camp Clik-Still for the People. This year I finally got my chance to buy the 1998 album by Boot Camp Clik, the best rap collective you might never have heard of, featuring underground gangsta/hardcore rappers like Cocoa Brovaz, Buckshot, Heltah Skeltah, and Bucktown, with tracks produced by such masters of the genre as Tony Touch, Shawn J. Period, and many more. If you like 50 Cent, NaS, Ghostface Killah, or Wu Tang Clan, this is a band you’ll want to get to know. It doesn’t get grimier than this. 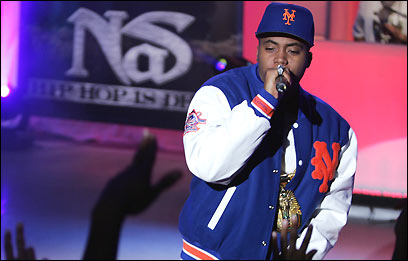 NaS released a series of remixes to his “Where Are They Now?” single, each of which featured a different bloc of rappers–There was an 80s mix, with Grandmaster Caz, MC Shan, Raheem (Furious Five), Doctor Ice (UTFO), Kangol (UTFO), Kool Moe Dee, Sha Rock (Funky Four Plus One), Tito (Fearless Four), Lique (Isis of X Clan), Dana Dane, Pebblee and Just Ice. There was a 90s mix with Redhead Kingpin, The Original Spinderella, Rob Base, Father MC, Monie Love, Mike D (of the Jungle Brothers), EST (of 3XDope), Positive K, Das EFX, Lords of the Underground, Dres (of Black Sheep). There was a West Coast mix with Breeze, Kam, King Tee, Candyman, Threat, Ice-T, Sir Mix-A-Lot and the Conscious Daughters. And so on. NaS just answered his own question: Where are they? He found them, and in so doing proved that hip hop is far from dead.