Continuing in my guest post week, which is mirrored at Break Thru Radio (just go there and click on “articles”), with another list assessing the year thus far.

This January release begins with a strum and a chkachkachk. Cool. Then it goes on to tell of . . . Of . . . Actually, I have no idea what the song is about. But it mentions the comfort of a George Jones album and features a vocal track that recalls the best of Mark Bolan and old Stones. Fantastic.

Itâ€™s not Oasis. Itâ€™s not even British. Itâ€™s a shoegazey anthem thatâ€™s neither pretentious, nor dull, and that real musical chops and hot licks, to boot. Itâ€™s a single off of Saturnaâ€™s long awaited (by me, at least) full-length, Some Delicious Enemy. Itâ€™s great.

The slow grind of the Replacements used with Americana sensibilities. This is a demo, and sounds a little like it was recorded through gauze, but itâ€™s still fantastic. Big Buildings are probably my favorite band youâ€™ve never heard of, but you can get some of their stuff on emusic so you no longer have any excuses.

Breaking news: The band just lost a founding member. That sucks. Hope they can find a replacement and keep it going. 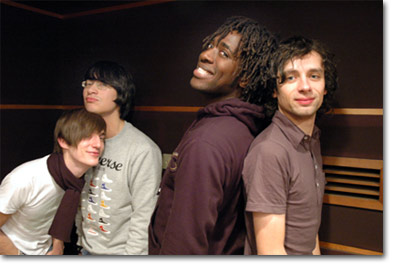 I wanted not to list the same band twice during this week of guest posting, but this song compels me to. (You can guess what list BP will also appear on, later this week). Just this once. Musically, itâ€™s standard Bloc Partyâ€”crawling drums, distant background vocals, and a chorus that kicks up both the volume and the energy. But the lyrics are affecting on a personal level, not something I usually get out of BP. â€œI love you in the morning, when youâ€™re still hung over. I love you in the morning, when youâ€™re still strung out.â€ Itâ€™s the kind of song that makes you wish you could be loved that much. And all that goes double for the acoustic version, which breaks me.

5. PHONTE FEATURING CARLITTA DURAND-Take on Me.

Who would expect one of the members of North Carolinaâ€™s rap ensemble, Little Brother, to do what is basically a retooling, revamping, remaking (and improving) of an â€˜80s pop song? Itâ€™s so beyond the original that it canâ€™t even be called a cover. But the true genius is in the last 30 seconds where he eschews the typical rap break in favor of a fade out ramble justifying what heâ€™s just done. Brilliant.