Home
Berkeley Place
ME, JULIO, AND TEN THINGS DOWN BY THE SCHOOLYARD

1. Eastern Conference Champions recently were robbed in L.A. Thieves took all of their equipment (guitars,
amps, drums, etc.). Help them out, if you can. Theyâ€™re a good bunch of guys.

2. You all pay me for my opinion, but due to my self-imposed RIAA ban I havenâ€™t commented on the recent Brit Chick invasion. I wonâ€™t post on these artists, â€˜cause their albums are protected by the music mafia, but I will say in this random opinion that I really dig Amy Winehouse, but I don’t get the hype about Lily Allen. She’s basically Lady Sovereign with better lyrics, a little better voice, and she’s a suitable boy-toy for older guys. I think she’ll be a flash in the pan. Ditto Corrine Bailey Rae, who I loved in concert but then was underwhelmed by more than half the songs on her album. Out of all of them, only Amy will be sticking around past this year. Plus, she heckles Bono. What more can you ask for?

4. And this movie, you definitely don’t need to see.

5. Is Paul Simon getting some kind of resurgence I’m unaware of?
Me and Julio Down By the Schoolyard-Peter Bjorn and John

Me and Julio Down by the Schoolyard-Julie Doiron Alternate link.

6. Rumor has it that now that Capitol Records was bought by Virgin, some great bands including the Vines, Sound Team, Fischerspooner, and Melissa Auf Der Maur (of Hole) are now free agents, as are Virginâ€™s Ima Robot. Letâ€™s hope they go indie! I also hear itâ€™s confirmed that surviving the merger are the following bands Iâ€™ve enjoyed but I canâ€™t post about their records: OK Go, Corinne Bailey Rae, Lily Allen and the Decemberists.

7. I can’t say I love this music, but I’m posting it because the band name is fantastic.

Salt-Kiss the Anus of a Black Cat

The Cranes-Kiss the Anus of a Black Cat 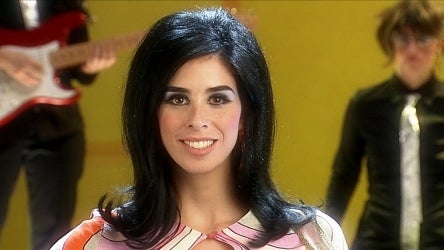 The Sarah Silverman Program was funny as hell. I hear it’s been renewed for a bunch more eps. I hope she sleeps with God again. That whole segment was funny, starting where she says to God, who happens to be African American, “Oh! Are you God’s black friend?”